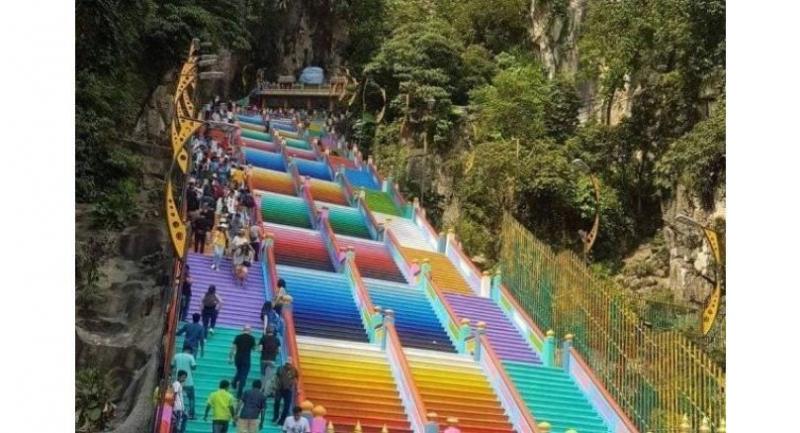 PETALING JAYA: The newly painted steps of Batu Caves may be an Instagram favourite but they have landed the temple committee in trouble with the heritage authorities.

Deputy Tourism, Arts and Culture Minister Muhammad Bakhtiar Wan Chik told The Star that it has also been asked to prepare a report for further action.

“I am very disappointed with the building management (Tan Sri R. Nadarajah), especially when the department’s officers informed me that they had met his son Datuk N. Sivakumar a few times, advising him that any renovation or painting job within 200m of the heritage site requires written permission from the department.

“In fact, even before the application is submitted to the Selayang Municipal Council (MPS), they need to get the green light from the department first,” he added.

Asked if the temple would be de-listed from the heritage registry should its management continue to flout regulations, Muhammad Bakhtiar said: “We cannot simply do that, considering the amount of time and effort spent getting the temple registered as a national heritage site in the first place.”

“But they must respect the rules and follow accordingly. In fact, I hope this message goes out to all building owners whose buildings are registered as national heritage – to not simply carry out renovation or painting jobs without first getting consent from the heritage commissioner,” he added.

Muhammad Bakhtiar said Section 40 of the Act was very clear that any renovation involving painting jobs at heritage sites had specific guidelines to follow.

“For the Batu Caves Temple, the main staircase leading up to the cave temple is within the Batu Caves reserve and bordering Lot 1197, 4557 and 6020 which have been designated as national heritage sites and require permission from the department for any upgrading work,” he said.

“I was told that the commissioner (heritage) was not consulted and a team was sent to check on the work recently. I was informed that the painting (job) has disturbed the harmony, integrity and originality of Batu Caves,” he added.

Yesterday, Star Metro had reported that the multi-million ringgit beautification job could land the temple management in trouble as the works were not sanctioned by the department.

Nadarajah claimed that they had the necessary approvals to proceed with the renovations, including those from MPS, which the council had however denied giving.

The temple management painted the staircase five days ago in preparation for the consecration ceremony tomorrow.

All 13 temples in Batu Caves underwent renovations at a cost of RM6.1milliion.