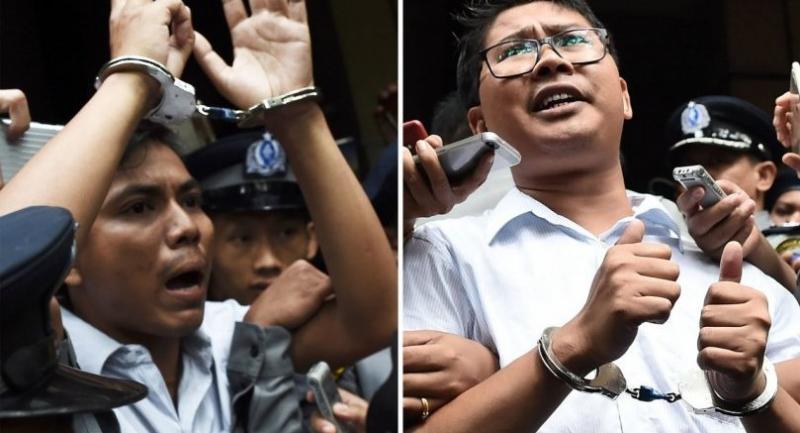 This combo shows journalists Kyaw Soe Oo (L) and Wa Lone (R) being escorted by police after their sentencing by a court to jail in Yangon on September 3.//AFP

Amnesty International on Monday described as “appalling” a Myanmar court’s verdict which saw two Reuters journalists sentenced to seven years in jail for breaching the Official Secrets Act during an investigation into a massacre of Rohingya men.

Tirana Hassan, Amnesty International’s director of Crisis Response, said the court’s decision was politically motivated and designed to send a stark warning to other journalists in the country if they investigated military abuses.

She called for the convictions to be quashed and for Wa Lone and Kyaw Soe Oo to be released unconditionally and immediately.

“Today’s appalling verdict has condemned two innocent men to years behind bars. Wa Lone and Kyaw Soe Oo face lengthy jail terms simply because they dared to ask uncomfortable questions about military atrocities in Rakhine State. These convictions must be quashed, and both men immediately and unconditionally released,” she said in a press statement.

“This politically motivated decision has significant ramifications for press freedom in Myanmar. It sends a stark warning to other journalists in the country of the severe consequences that await should they look too closely at military abuses. This amounts to censorship through fear.

“Today’s verdict cannot conceal the truth of what happened in Rakhine State. It’s thanks to the bravery of journalists like Wa Lone and Kyaw Soe Oo that the military’s atrocities have been exposed. Instead of targeting these two journalists, the Myanmar authorities should have been going after those responsible for killings, rape, torture and the torching of hundreds of Rohingya villages,” the statement added.