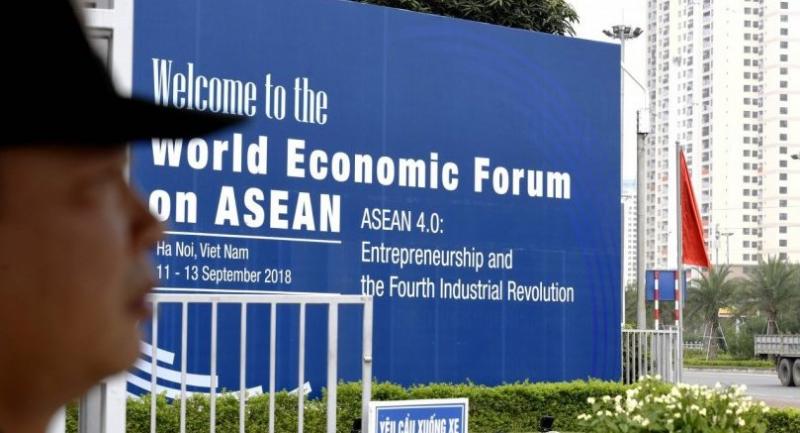 A Vietnamese security personnel guards the entrance of the National Convention Center in Hanoi, the venue of the World Economic Forum on ASEAN on September 10, 2018./AFP

"Making Asean into a community requires consensus, unity and agreement," Mr Phuc said in an e-mailed reply to questions from The Straits Times. "Asean needs to maintain this spirit in its activities and relationships with others."

Intra-Asean trade is about a quarter of Asean's total trade, he pointed out. "To enhance (the bloc's) economic potential, Asean countries need to increase integration, trade and investment within the bloc, and at the same time expand economic cooperation with partners and promote the leading role of Asean in regional economic integration," he said.

These fledgling businesses, which are developing products and services like syariah-compliant bitcoin and fertilisers that reduce the emission of global-warming contributor nitrous oxide, have their own programme to share their stories of disrupting traditional commerce and exchange tips on funding and growing their businesses.

This is the second time the regional event is in Vietnam. The first was in Ho Chi Minh City in 2010.

Since then, Vietnam's economy has been one of the strongest performers in South-east Asia. In the first half of this year, its gross domestic product grew 7 per cent, as it maintained the momentum from its 6.8 per cent full-year growth last year. Foreign direct investment inflows also hit a record US$17.5 billion (S$24 billion) last year.

But like the rest of Asean, it faces several headwinds. While increasing automation threatens to take away many of the labour-intensive jobs that continue to drive regional economies, the ongoing trade spat between China and the United States could threaten supply chain networks woven through the bloc. Meanwhile, US interest rate hikes have put downward pressure on regional currencies, especially in Indonesia and the Philippines.

Vietnam has a booming digital economy but bloated bureaucracy that Mr Phuc's government has been trying to trim. "Policies have to create motivation and opportunities for people and entrepreneurs to do business," he said. "At the same time, we use the satisfaction of people and entrepreneurs as the measure to evaluate the effectiveness of policies."

Mr Phuc pledged to accelerate digitalisation in areas like agricultural management, logistics and health. "This will promote quality and efficiency in service industries and increase competitiveness of our industries while creating a big market to grow our digital economy," he said. "This will let Vietnam take a big step towards the future."