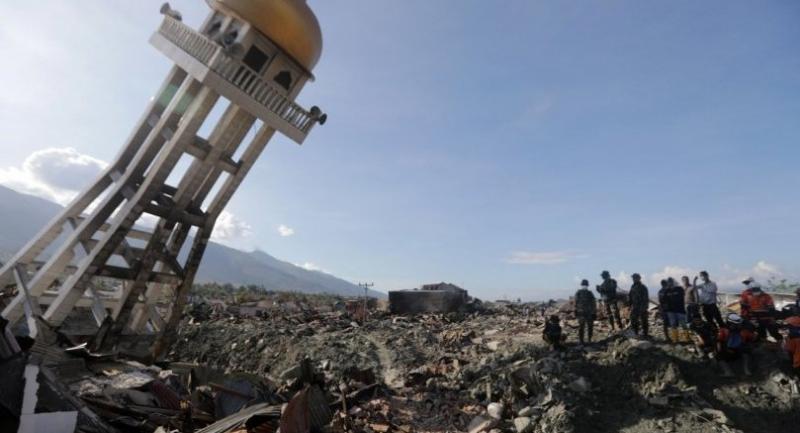 Rescue team members (R) take a rest near an earthquake-devastated area during a search for victims under the ruins of collapsed buildings in Balaroa, Palu city, Central Sulawesi, Indonesia on October 8.//EPA-EFE

Palu, Indonesia - Monuments and parks will be built over parts of Indonesia's Palu as a solemn tribute to the thousands buried in a quake-tsunami whose corpses will never be found, officials said Monday.

Nearly 2,000 bodies have been recovered since the disaster on September 28, but authorities believe another 5,000 may be entombed beneath the ruins.

The search will end Thursday, officials say, when the worst-hit places will be sealed off, becoming mass graves containing unknown numbers of dead.

Memorials will be erected at Balaroa, Petobo and Jono Oge outside Palu where liquefaction -- a phenomenon where the brute force of a quake turns soil to quicksand -- engulfed entire villages.

"We will build a monument, and in the future we will create green spaces there," Haris Kariming, a spokesman for the provincial government, told reporters in Palu.

The deadline gives family still searching for the missing just days to try to find their loved ones, and say goodbye.

In Balaroa, the news was too much to bear for Halimah Ariav Kobo, whose 25-year-old daughter Ummu Kalsum vanished in the disaster.

Squatting by debris where her daughter once lived, Kobo and her husband point to a filthy pool of black water and shattered concrete where they believe Ummu lies.

Rescuers had searched the area three times, she said, but found no trace of their daughter or her husband, who only married two months earlier.

"If they flatten this place to become a cemetery, what about all the bodies that have not been taken out?" Kobo told AFP.

"I hope my child is found, in whatever condition. I want to take her home and bury her in a proper way. As a mother, I will not leave this place until the search is finished."

Hopes of finding anyone alive have all but vanished.

But with days until the search is called off, family are more desperate than ever.

"Even if they stop looking, we will still try to find them ourselves," said Gopal as he picked through rubble looking for his aunt and uncle in Balaroa.

"When we can no longer do it ourselves, we leave it to Allah," said the 40-year-old, who like many Indonesians goes by one name.

Rescuers called off the search Monday at Hotel Roa-Roa, which was reduced to a tangled mess by the force of the quake.

It emerged as an early focus of efforts to extract survivors after seven people were pulled out alive.

That optimism came to nothing, with efforts yielding only 27 bodies.

"The SAR operation at Hotel Roa-Roa has ended, because we have searched the entire hotel and have not found any more victims," Bambang Suryo, search and rescue field director in Palu, told AFP.

Authorities believed the 80-room hotel was near capacity when the district was ravaged by a 7.5 magnitude quake and tsunami and estimated 50 to 60 people could be trapped inside.

Rescuers have struggled to find remains in the wreckage, a job made worse as mud hardens and bodies decompose in the tropical heat.

A total 1,948 dead had been found as of Monday, said Willem Rampangilei, head of Indonesia's disaster agency.

Most had been returned to their families, but at least 815 had been buried in pits to avoid the spread of disease, he added.

Balaroa resident Sarjono agreed with sealing the area for good.

"But only if they help us relocate elsewhere. If they don't, where will we live?" the 50-year-old told AFP near the debris of his former home.

Excavators and rescuers combed Balaroa on Monday, where a massive government housing complex was swallowed up by the disaster.

Petobo, a cluster of villages, was also subsumed when vibrations from the 7.5-magnitude quake caused the earth to churn and rise up.

Officials say as many as 5,000 people are feared buried at Balaroa and Petobo alone, but stressed it was almost impossible to know the exact number.

Relief efforts have escalated to assist 200,000 people in desperate need. Food and clean water remain in short supply, and many are dependent entirely on handouts to survive.

Helicopters have been running supply drops to more isolated communities outside Palu, where the full extent of the damage is still not entirely clear.

Around 74,000 people have been displaced by the quake.

More than 10,000 have been injured, a quarter of them seriously, disaster agency spokesman Sutopo Purwo Nugroho said Monday.

The Red Cross said Monday it had treated more than 1,800 people at clinics and administered first aid to a similar number in the immediate disaster zone.

Indonesia sits in the world's most tectonically active region, and its 260 million people are vulnerable to earthquakes, tsunamis and volcanic eruptions.