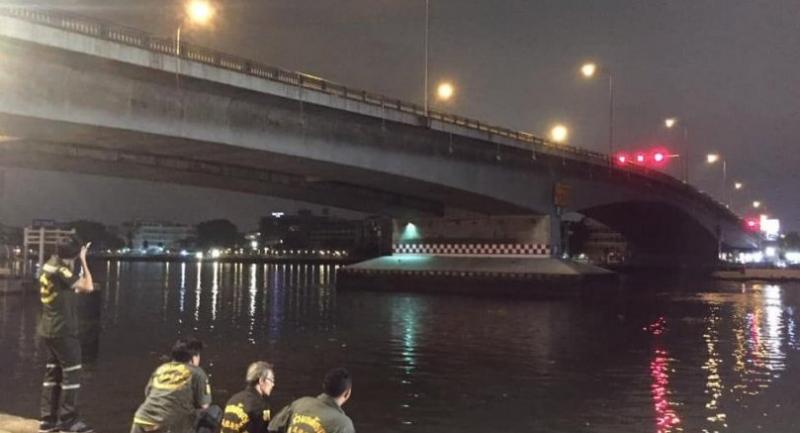 A Thai woman in her 20s or 30s is assumed to have committed suicide by jumping from the Somdet Phra Pinklao Bridge into the Chao Phraya River early Monday morning, Bang Yi Khan police inspector Pol Lt-Colonel Narong Mankhong said.

Rescue workers responding to a 2.30am incident report rushed to the scene and sent out boats to search for the missing woman, but the operation proved to be fruitless, said Narong, who was part of the response team.

Their plan to use divers in the search was called off as the river was too dangerous for such an operation due to earlier downpours, and the fact that the section of the river had many large boats passing through, the inspector explained.

Narong said an initial police investigation found that the unnamed woman had hailed a taxi from The Sense Pinklao mall on Boromrajajonani Road to the middle of the bridge.

After paying the fare, she went straight to the bridge rail and jumped off, officers were told.

A group of young men and women later contacted the police as they suspected the suicidal woman was their friend.

They told police that she had joined their drinking party at the mall before she became tearful, lamenting that they would not see each other again, but without elaborating on the issue or issues that she was distressed about.

She got up from the table and left the party, leaving behind her mobile phone.

As she failed to return, they became suspicious and looked for her, which was when they heard about the suicide-jump and feared the worst, Narong said.