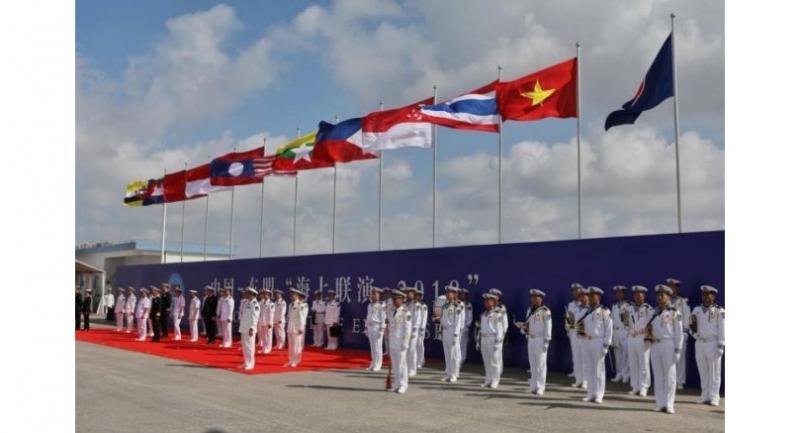 Contingents from the participating nations forming up for the opening ceremony of the Asean-China Maritime Field Training Exercise.PHOTO: LIANHE ZAOBAO

In an opening ceremony at Ma Xie Naval Base attended by all 11 countries, Singapore chief of navy, Rear-Admiral Lew Chuen Hong, emphasised the sea's importance to the region, and how prosperity could be possible only if the sea is stable and secure.

"To allow the stable and collective use of a shared space, a set of common rules and understanding is very important," he said, giving the examples of the United Nations Convention on the Law of the Sea, adopted in 1982, and a naval code agreed to by Asean and regional powers last year.

Singapore and China are co-organising the six-day drill, which is expected to involve helicopter cross-deck landings and a joint search and rescue operation.

Representing Singapore is the Formidable-class frigate RSS Stalwart, which arrived on Sunday, while China is sending a destroyer ship, Guangzhou; a frigate, Huangshan; and a supply ship, Junshanhu.

The other ships participating are a patrol vessel from Brunei, a logistics support vessel from the Philippines, and a frigate each from Thailand and Vietnam. The field training exercise comes after a two-day table-top exercise held at the RSS Singapura - Changi Naval Base in August this year.

Then, naval officers from the 11 countries discussed plans to tackle simulated scenarios, such as search and rescue operations, and medical evacuation.

In his speech, RADM Lew said that since ancient times, the ocean carried trade across the Asia-Pacific, and ships plied the maritime silk route from ports in Guangzhou, throughout South-east Asia, to the Middle East, Africa and beyond.

"Asia's phenomenal growth, especially in the last 50 years, has uplifted all our nations and our peoples. That growth is literally carried on the sea," he added.

RADM Lew said that the Code for Unplanned Encounters at Sea (Cues) is one example of promoting practical cooperation and norms - "it enhances operational-level communication and reduces risk of miscalculations".

The code was adopted by the Asean Defence Ministers' Meeting-Plus last year - a grouping which includes the United States, China, Russia and Japan.

He noted that Asean defence ministers had reaffirmed the Asean-China Maritime Exercise as an important confidence-building measure at the 12th Asean Defence Ministers' Meeting in Singapore last week.

Speaking to reporters last Saturday, Singapore Defence Minister Ng Eng Hen said that the exercise was a "very positive engagement", and that China was "very happy" with it.

"I think it's always better that you have exercise and you have troops meeting each other, having the same mission, looking at each other eye-to-eye and planning together, rather than across the table at cross purposes and contending on issues on the opposite side."

He will be visiting the exercise on Tuesday, before going to Beijing to attend the 8th Beijing Xiangshan Forum, which brings together high-level defence, military and foreign affairs leaders from around the world to discuss security issues.