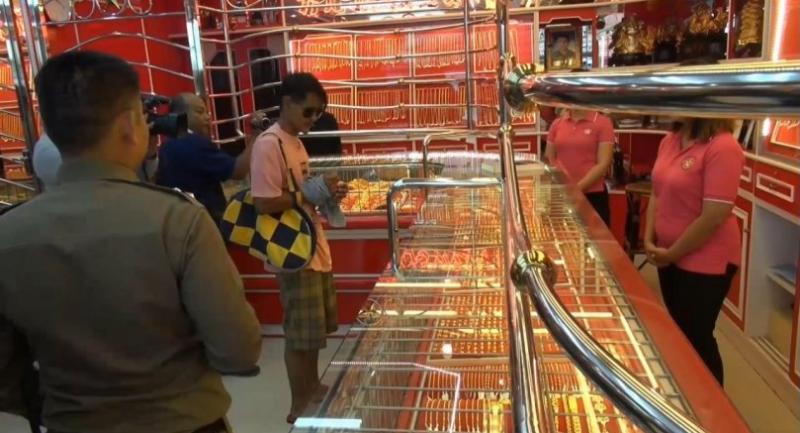 Police on Monday morning brought a 33-year-old man to perform a crime re-enactment following his reported confession to having acted alone in robbing a gold shop in Songkhla’s Hat Yai district.

The robbery took place last Tuesday, with gold jewellery worth nearly Bt200,000 having been stolen.

After re-enacting how he had pretended to be a customer before snatching gold necklaces and fleeing on his motorcycle, suspect Phermporn Piamsak took the opportunity to apologise to the gold shop’s owner, Anyawan Rattanamanee. Car-painting worker Phermporn, who was arrested on Sunday with the remaining gold necklace that had not been recovered and the getaway motorcycle at his wife’s home in Hat Yai’s Tambon Thung Yai, reportedly told police that he had robbed the Rattanamanee Gold Shop in the Talad Khlong Toei area of three gold necklaces worth nearly Bt200,000 “out of impulsiveness”.

He denied having committed the robbery under the influence of drugs or due to financial woes, police said.

While police had been looking for the robbery suspect, as captured on CCTV footage in the area, some community-minded individuals tipped them off about a man suspiciously bringing gold necklaces for sale at various shops in Yala’s Mueang district.

This resulted in the identification of the suspect as Phermporn, who was previously convicted of theft in Mueang Songkhla in 2015 and had just been released from jail for that offence, police said. Police believe last week’s robbery was premeditated and not carried out on impulse.