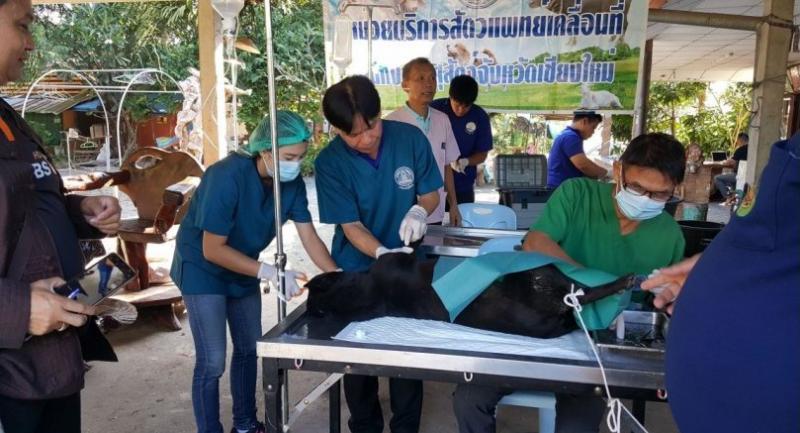 Livestock-development officials on Tuesday started rounding up stray dogs in a village in Chiang Mai’s Doi Saket district after a young girl was mauled by three of the animals. Officials from the Doi Saket livestock development office started the operation at Ban Pho Thong Charoen village in Tambon Chiang Doi at 7.30am after the girl had been badly injured by the dogs on Sunday.

She was bitten on the head and left arm and is now recovering at home. The officials mixed transquiliser in with food for the stray dogs to slow them down before they were shot with anaesthetic darts.

They were then captured for blood testing and sterilisation.

Shortly after the operation started, the officials captured a male dog and three females believed to be the ones that had attacked the girl.

Arthit Yodkhamlue, chief livestock development officer for Doi Saket, said the officials planned to capture around 20 of the 30 stray dogs in the village by the end of today, and would continue to seek out the remainder until all of them were rounded up.

The dogs will be sterilised and subjected to a blood test to see whether they are infected with rabies or other diseases, he said. The captured dogs will be quarantined in the area for seven to 10 days to see whether they have rabies symptoms.

If they clear of any serious disease, they will be sent to dog shelters in Mae Taeng and San Pa Tong districts of Chiang Mai later, he explained.

Arthit added that the government agencies concerned had agreed to capture all the stray dogs and relocate them from the village following the attack.