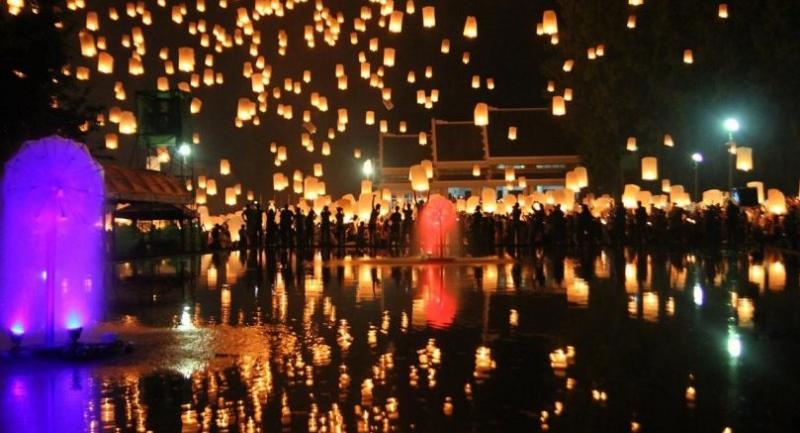 The annual Yi Peng or northern traditional Loy Krathong Festival scheduled for November 20-23 in Chiang Mai is expected to generate tourist spending of up to Bt1 billion, said a senior provincial official.

The northern city is expected to draw many tourists this year, said Boonlert Buranuprakorn, CEO of the Chiang Mai Provincial Administrative Organisation, at a Sunday evening press conference.

In other provinces, revellers at Loy Krathong festivals launch krathong or floats into the river or other bodies of water, but in Chiang Mai they release flying lanterns into the air.

Although the number of Chinese group tours have dropped, said Boonlert, more individual Chinese tourists are visiting Chiang Mai, and so total numbers are not expected to decrease there by much.

He said some 2,000 officials would be deployed to ensure the security of tourists during the festival.

Giant lanterns are being built do decorate Chiang Mai’s downtown streets at night during the festival, and hundreds of thousands of lanterns will be lit around the city, he added.

He promised a very special festival this year, with a competition for the best tradition krathong floats and a trophy granted by His Majesty the King.

Damrong Ong-arj, president of the Chiang Mai Tourism Business Association, said almost all accommodation in Chiang Mai has already been booked for the festival.

He said the association would fully comply with the rules set by government agencies for activities involving the release of flying lanterns.