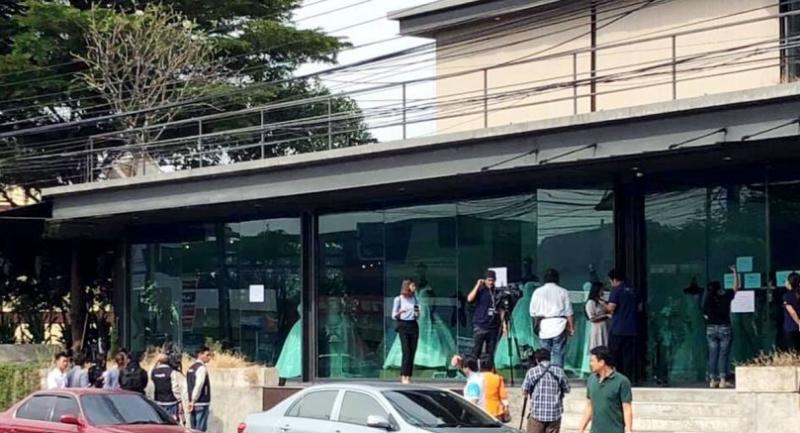 THE IT CRIME Suppression Centre is investigating a Bangkok wedding-planner accused of duping as many as 400-500 brides- and grooms-to-be of at least Bt10 million. Some 20 alleged victims of a Soi Sukhonthasawat 9 shop’s allegedly fraudulent wedding packages were disappointed on Tuesday morning when the shop owner did not show up as promised for press conference to explain the disagreement and the shop was closed. The building where the shop was located has placed a sign disowning any responsibility for what its tenant had allegedly done.

The group, led by 27-year-old Jiraporn Ba-ae, then went to file complaints with acting immigration police chief Pol Maj-General Surachate Hakpal, in his capacity as deputy director of the National Technology and IT Crime Suppression Centre. Jiraporn told the senior police that the number of damaged people affected by the newly opened shop – which promoted its packages on Facebook – might be 400-500 and involving at least Bt10 million. She cited the 400-strong Line Group chat for those affected, which she had set up after realising the alleged fraud.

Surachate said that police would investigate and gather evidence to possibly file three charges of fraud, money-laundering (as there are allegedly hundreds of victims, which has convinced police about the suspect’s alleged criminal intent) and violating the Computer Act. Jiraporn said she was in the third group, not having received her Bt20,000 deposit.

One victim, who asked not to be named, said he found this credible wedding shop via Facebook and paid a Bt210,000 deposit for the Bt850,000 wedding package.

As it was suggested he purchased a tour package to Japan to do a pre-wedding photoshoot there, he agreed to pay another Bt350,000 after which the shop ceased its contact with him.

His later discovery of negative comments on the shop’s page concerning non-delivery of promised services and its lack of customer reviews prompted him to check with the Department of Business Development, Ministry of Commerce, which told him the shop’s business had been cancelled.

His call to the shop to be responsible for the damages also went to deaf ears, he said. In the end, he proceeded with his wedding, but had to pay and do everything all over again.