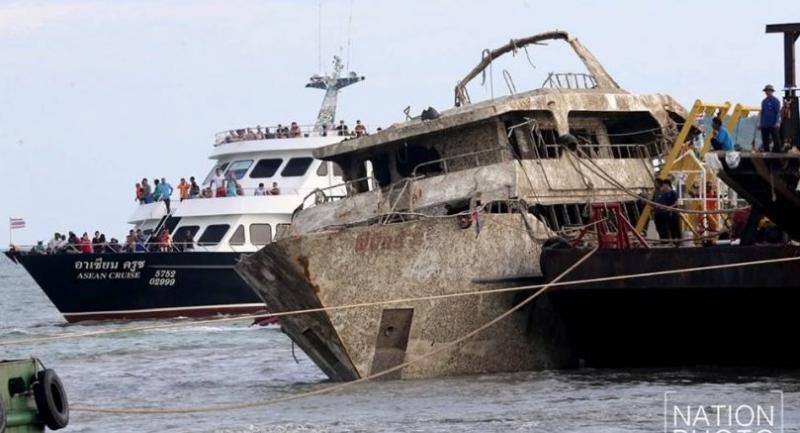 The government has made the highest security measures for the just-salvaged “Phoenix” boat, which sank off Phuket province in July, taking with it the lives of 47 Chinese tourists.

The goal is to prevent anyone from meddling with key evidence as authorities investigate one of the biggest boat tragedies in Thailand.

On July 5, Phoenix capsized after a short, sudden storm while carrying many Chinese tourists on a tour. Of the passengers, 47 drowned in the sea. Several questions have since emerged as to whether the tour-boat operator had complied with safety standards or whether the yacht was itself substandard.

“The area for the yacht will be cordoned off, with CCTV installed to record what happens around it. Also, we will have security guards on duty in the area around the clock,” Tourism and Sports Minister Weerasak Kowsurat said yesterday, as he boarded a boat to see how the salvaged Phoenix is being hauled to a designated spot in Phuket.

Also on the boat were Tourism and Sports Ministry permanent secretary Pongpanu Svetarundra, Li Chunlin, Counsellor and consul general of the Chinese Embassy in Thailand and several senior Thai and Chinese officials. Weerasak said both the Thai and Chinese governments have paid close attention to the Phoenix case.

He said progress in the investigation would be reported to him and then the Chinese government before being released to the public.

Li said China was satisfied with the Thai government’s sincere efforts to investigate the cause of the boat tragedy.

“We are confident that after the cause is identified and with safety measures for tourists being boosted in Thailand, confidence in Thai tourism will return,” he said.

Phoenix was stuck at the bottom of the Andaman Sea for three and a half months. One salvage team tried and gave up after two months, which also saw one diver losing his life.

Earlier this month, a crane and barge arrived from Singapore through arrangement with the Thai police. They played a key role in successfully hauling up the Phoenix on Saturday.