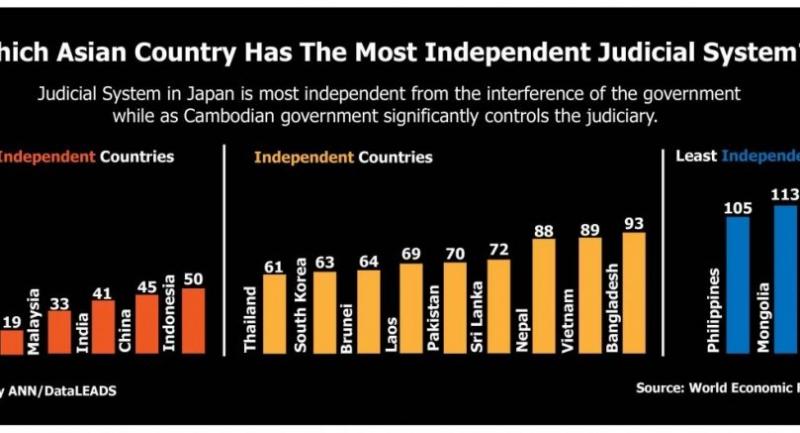 The judicial system in Japan is considered to be free from the influences of the government, a significant evidence of the uncorrupt political system, according to the World Economic Forum executive opinion survey.

The survey is done in 137 countries. Japan is ranked 10 globally and thus highest in Asia in terms of the judicial freedom. It is followed by Singapore (19) and Malaysia (33).

India is ranked 41 in terms of judicial independence. The country has seen some conflicts in terms of the judiciary being biased owing to political affiliation.  It is followed by China ranked 45 and Indonesia ranked 50.

Thailand is ranked 61 globally. Analysts say the country needs judicial reforms to contribute to the improvement of judicial improvement and better and partial accessibility. Thai “judiciary needs sufficiently to be empowered and independent to play that constitutional role, while showing both sufficient integrity to avoid corruption and sufficient restraint not to overreach into the political realm”.

Judiciary in Pakistan has always been in turmoil for not only lacking independence but also ‘abetting the consolidation of illegal powers’.  The government has made significant efforts to keep the judiciary week and under control. The other two South Asian countries Sri Lanka and Nepal are ranked 72 and 88 respectively.  Nepal is followed by Vietnam (89) and Bangladesh (93).

The judiciary in Philippines has been termed to be ‘under attack’. The United Nations Rapporteur recently stated that there was a "worrisome deterioration of the rule of law and that the independence of justice in the Philippines is under attack”.  It is ranked 105 followed by Mongolia at 113.

Judiciary in Cambodia is the least independent from government influences and the corruption in the judiciary is stated to be endemic. The rights groups have always criticised the government for undermining the independence of courts.