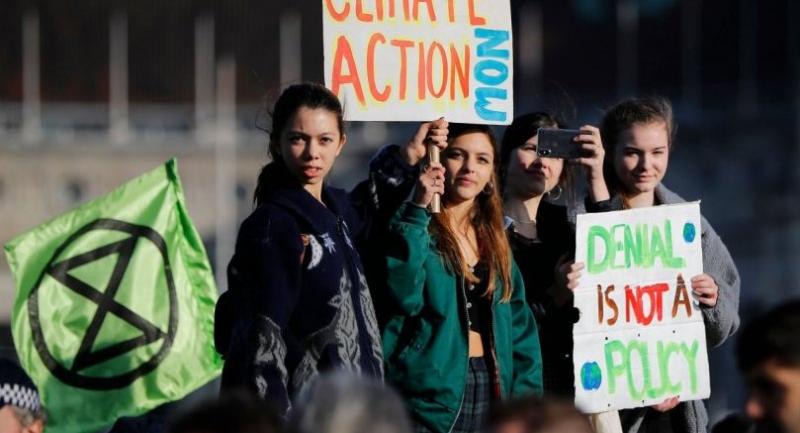 AFP file photo: Demonstrators take part in a pro-environment protest as they block Westminster Bridge in central London on November 17, 2018, to show anger at government inaction on climate and ecological issues.

Guterres issued the call to arms ahead of next month's COP24 climate talks in the southern Polish city of Katowice, which will attempt to revive a global climate deal reached in Paris in 2015.

He praised the online summit, which has been organised by the Marshall Islands using online technology to remain carbon neutral, as an example of the innovative thinking needed to combat climate change.

"We need more such creativity to transform our economy and limit global warming to as close to 1.5C as possible," he said.

"Climate change is moving faster than we are and we cannot afford any more delays. The world counts on all nations to ensure that next month's climate conference in Poland is a success."

Former US vice president Al Gore said the way humanity was treating the planet was "unimaginable".

"We're still pouring 110 million tonnes of global warming pollution into the atmosphere around our planet like it's an open sewer," the Nobel laureate said.

"All of the extra energy trapped by man-made global warming pollution... is now equal to the amount of heat energy that would be released from 500,000 Hiroshima-class atomic bombs exploding on Earth every single day."

UN General Assembly president Maria Fernanda Espinosa had her own bleak statistics, telling the online gathering that carbon dioxide levels were now the highest in 800,000 years.

She also pointed out that 17 of the 18 hottest years on record had occurred since 2001 and that the cost of climate-related disasters in 2017 topped $500 billion.

Yet Espinosa said it was not too late to act.

"When numbers such as these cause us to panic, there are other reasons to be encouraged," she said.

"My message today is not one of dismay but one of hope -- that we can come together as a global community and work as one to protect and heal our planet and preserve it for future generations."

The online summit consists of a rolling, 24-hour livestream that will hear addresses from world leaders including France's Emmanuel Macron and Justin Trudeau of Canada before organisers issue a declaration early Friday.

It can be viewed at www.virtualclimatesummit.org.