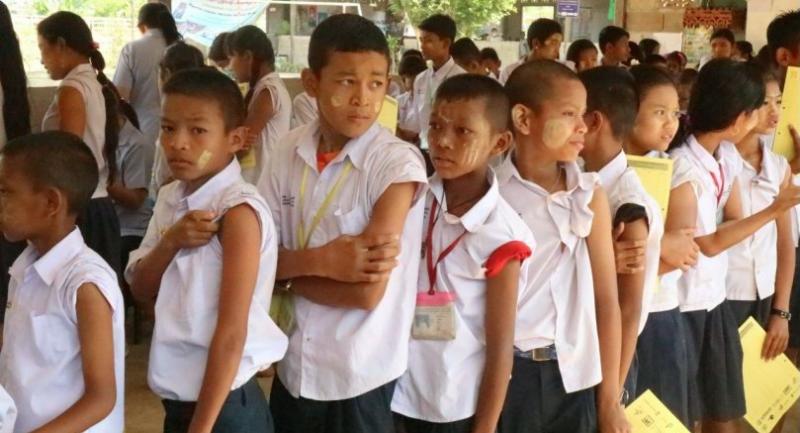 A fresh outbreak of measles among Myanmar migrant students in the border district of Mae Ramat in Tak province has been blamed on the fact that many pupils have never been vaccinated as they frequently move back and forth across the border. Tak health authorities are therefore urgently trying to get an initial 1,500 dosages of anti-measles vaccine required to administer to the youths this week in a bid to contain the contagious disease, epidemiology expert Dr Narit Boonthanapat from Tak’s Mae Sot Hospital said on Tuesday.

Narit was commenting as he went to inspect the situation at the Mae Ramat-based school, New Road Learning Centre, which has been closed indefinitely since early this week after public-health officials found 13 of its students infected with measles, with six of them in serious condition and now in hospital.

He said the situation was worrying and 1,500 dosages of vaccine were needed to provide to the school’s students, as well as to teachers and parents who were staying with them, as soon as possible as in order to contain the outbreak. It is crucial that Tak province finds this amount of vaccine amid a reported national shortage due to the outbreak of measles in southern Thailand, he added.

The expert explained that most pupils at the centre were of Myanmar nationality and their constant movement across the border resulted in the loss of opportunity to get vaccinated for various diseases, as they missed the scheduled vaccination rounds provided under a campaign to boost immunity among migrant children by Tak’s public health office and Mae Sot Hospital.

This resulted in the greater risk of infection and disease outbreak among the students.

Measles is an acute systemic viral infection that can cause fever, a rash and breathing difficulty. It can also be fatal.

Although highly contagious, it is preventable with a vaccine.