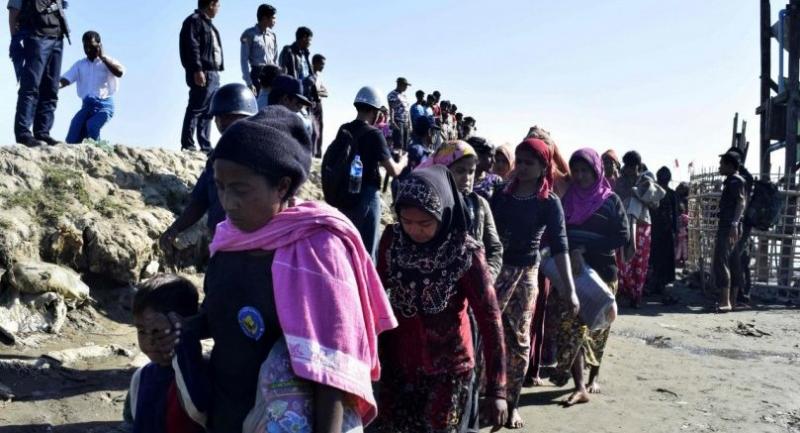 (FILES) This file photo taken on November 30, 2018 shows Myanmar Navy personnel escorting a group of Rohingya Muslims back to their camp in Sittwe, Rakhine state after they were caught fleeing on a boat. // AFP PHOTO

Fleeing Rohingya Muslims sold ration books to help pay hundreds of dollars to traffickers in order to flee squalid Myanmar camps by boat, only to be stopped at sea and forced back destitute, the refugees told AFP on Friday. Images of hungry and thirsty refugees huddled on boats have stirred memories of a 2015 crisis, when thousands of fleeing Rohingya were stuck at sea as a trafficking trail south collapsed.

Some 120,000 of the stateless Muslim minority have languished in camps in central Rakhine for six years since a bloody bout of intercommunal violence with ethnic Rakhine Buddhists.

The end of the monsoon brings more favourable, if still treacherous, sailing conditions for those desperate to escape the camps that are branded as "open-air prisons" by rights groups and where the refugees have little access to work, education or healthcare.

One Rohingya boat this week made it to Aceh on the northern tip of the Indonesian island of Sumatra but several others have been picked up in Myanmar waters and those on board sent back to the camps.

Journalists are not allowed to enter the camps except on brief government-chaperoned tours, but one young Rohingya in Thechaung camp told AFP by phone how he had sold his food ration book to help pay the 600,000 kyat ($385) fee to traffickers.

He had hoped to reach Malaysia, but after 15 days at sea his boat was seized south of Yangon and authorities sent him and his fellow detainees back to the camps.

"I need to get my ration book back," he said.

AFP has withheld his identity to protect him.

UN refugee agency spokeswoman Aoife McDonnell said many of the Rohingya had sold or lost all their possessions, including their shelters, to pay people smugglers.

They are in "acute need of support" now they are back in the camps, she said. File photo: Rohingya refugees walk back to their tent during dusk at the Kutupalong refugee camp on November 18, 2018. // AFP PHOTO

A leader in nearby Dapaing camp confirmed that some escapees had paid up to $700 for their places on the flimsy fishing boats, often in the hope of reaching Malaysia or Indonesia.

So far five boatloads are known to have set off from central Rakhine, including the group of 20 men who made it to Aceh.

The four other boats were picked up in Myanmar waters between November 16 and 29 and carried between them a further 356 people, who have since been sent back to the camps.

There have also been rumours of sightings of several other vessels.

But fears that the number could escalate to 2015 levels are for now overstated, said Chris Lewa from the Arakan Project.

The circumstances are "completely different" now, she said, pointing out that the boats are much smaller and the Bangladeshi authorities have also managed to prevent any mass departures from the camps there.

"These places are big and we can't control everywhere," he added.

The young Rohingya from Thechaung camp told AFP he was already thinking about how to escape again.

"What is my future here?" he asked. "If I get another chance to go to Malaysia, I will take it."