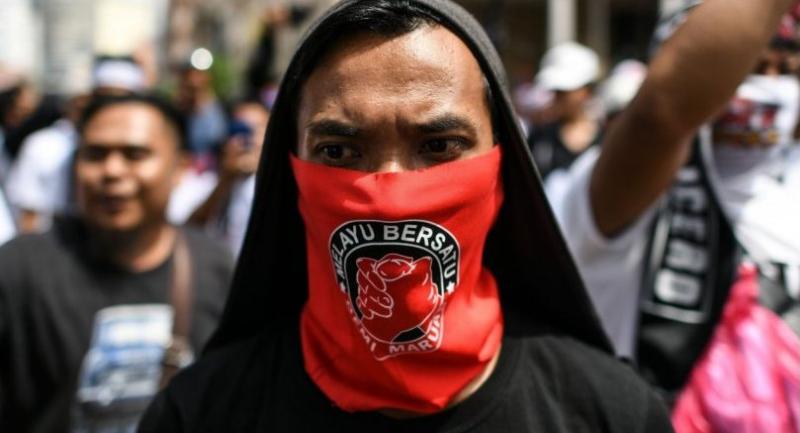 A protester covers his face with a banner reading " Malay Unite" during a rally organised by Muslim politicians against the signing of the UN anti-discrimination convention (ICERD) at Merdeka Square in Kuala Lumpur on December 8, 2018./AFP

Thousands of banner-waving Muslims dressed in white rallied in the Malaysian capital Saturday demanding protection of their rights, at a time of growing racial tensions in the multi-ethnic country.

Big crowds gathered in downtown Kuala Lumpur, chanting "God is great" and waving banners that read "Long live the Malays", an AFP reporter said. Large numbers of police were on the streets and major roads were closed.

Race and religion are sensitive in Malaysia, which is home to sizeable ethnic Chinese and Indian communities, and the Muslim Malay majority appears to be feeling increasingly insecure under a new government that is more representative of minorities.

The rally was originally intended as a protest against a plan by the government, which took power in May after defeating the scandal-mired old regime, to ratify a UN convention which aims to eliminate racial discrimination.

Authorities abandoned the plan after opposition from conservative politicians and Malays, who feared the treaty could erode privileges they have long enjoyed.

But Muslim groups pushed ahead with Saturday's demonstration, which alongside the convention has become about the bigger issue of defending Malays' position in society and Islam.

"I hope the other races don't challenge the rights of the Malays. As a Muslim, I want Islam to be the first (priority) in Malaysia," protester Arif Hashim, 26, told AFP.

Authorities did not immediately have an estimate for the size of the rally, which is due to end at 6:00 pm (1000 GMT).

Malays -- who make up some 60 percent of the country's 32 million people -- have been given substantial help, such as financial handouts, for decades but critics argue the system needs reform.

The United Malays National Organisation (UMNO) -- a party that ruled Malaysia at the head of a coalition until its election defeat -- has backed the rally.

Analysts say it is using the event to divert attention from its troubles.

The party, long a champion of the Malays, has been engulfed in scandal and infighting since being ousted.

Policies favouring Malays were introduced after riots between members of the Malay and Chinese communities in 1969 that left nearly 200 people dead.