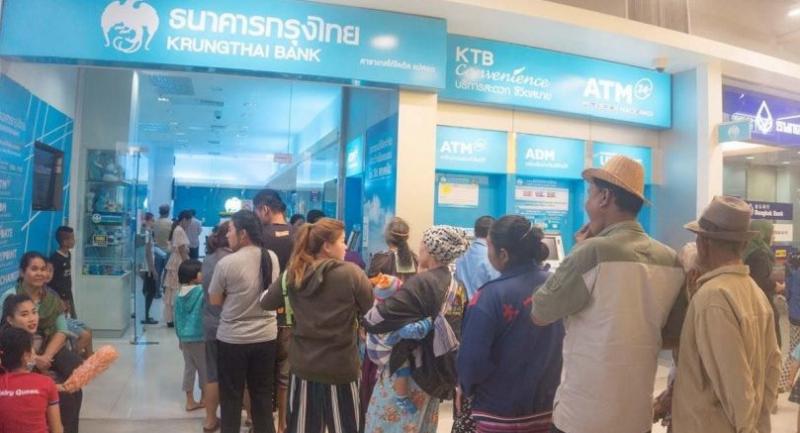 The last batch of 2.9 million state-welfare cardholders, who are entitled to Bt500 each as part of the Bt5.5-billion New Year gift programme for 11.1 million low-income earners, lined up to withdraw cash from Krungthai Bank’s ATM machines on Monday. “Under the programme, the government will deposit money for those who are entitled to receive the cash between December 8 and 10. The deposit for 4 million cardholders, whose ID cards begin with the numbers 32, 33 and 34, was made on Saturday while the deposit for 4.2 million others, with ID card numbers starting with 31, 35, 36, 37, 38 and 39, was made on Sunday.

Tempers frayed at Uthai Thani’s Lan Sak district as people accused others of jumping the queue and police were quick to intervene.

Some cardholders reportedly resorted to hiring other people for Bt10 to Bt60 a head to wait in queue and withdraw the cash on their behalf. Villager Nampheung Pongsawat revealed that she had been waiting in the Lan Sak queue for hours when some people showed up with 30-40 cards each to withdraw the cash on behalf of others having been paid Bt10 a pop. The fee apparently was a high as Bt60 in Nong Chang district.

In the northern province of Phayao, the queues at Krungthai Bank’s ATM machines were still long even after darkness fell. Those unable to withdraw cash due to technical problems said they be returning to talk with bank officials during office hours.