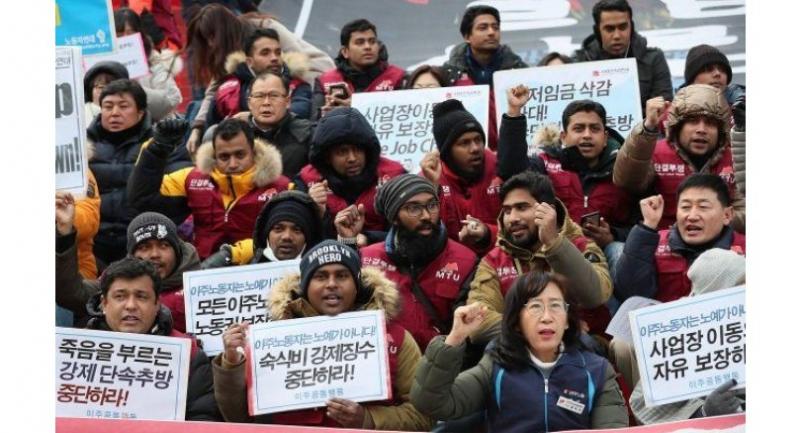 SEOUL — Tanka Lungeli, a Nepali who works at a factory in Korea, wants to change jobs because his employer does not pay him properly. But when he told his boss and requested the move, he says he received death threats and was treated as if he were a slave.

“The employer deducted my wage for reasons I do not know. He also raised the dormitory fee arbitrarily, and it became hard for me to live and pay my debt with the salary,” Lungeli, 34, told The Korea Herald last week.

“So I told him I wanted to work at a different place. But he threatened me to pay him back 5 million won ($4,400), saying he had paid a lot of money to get me to work here.”

Lungeli came to Korea in June 2017, obtaining an E-9 visa — nonprofessional worker visa — provided under Korea’s Employment Permit System. In September that year, he had to go back to Nepal for 15 days to see his sick daughter. When he came back, he expected his salary to be reduced by 200,000 won for the absent days, but the boss had deducted double the amount.

When he complained about it, Lungeli became a target of verbal abuse and bullying. The employer reduced his work shifts and raised the monthly dormitory fee from the 50,000 won stipulated in the contract to 150,000 won, without any explanation.

“The employer told me rich people in Korea can easily get out of jail, even if they kill somebody, by hiring lawyers. He said it would not be any trouble for him to kill me,” Lungeli said.

Due to the continued mistreatment, he suffered from depression and stopped working in August. Now, he stays at his dormitory, not knowing what to do, he said.

One might ask, why doesn’t he move to another workplace? However, the country’s Employment Permit System hinders foreign workers from choosing their workplaces without permission from their employers.

Introduced in 2004, the system invites low-skilled workers from 16 countries, mainly from Central and Southeast Asia, to work in limited industries that include manufacturing, construction, fishing and farming, which the Labor Ministry views as suffering from shortages of manpower as Koreans avoid them.

Setting an annual quota, the Labor Ministry said it has accepted about 45,000 workers under the system this year. The workers can work for up to three years, after which the stay can be extended for another one year and 10 months, if the employer agrees.

Some say the employment system has opened the gate for foreign laborers to find work in Korea, and for industries to compensate for the shortage of manpower.

But because the program prohibits the workers from moving workplaces without permission from employers, and then only up to three times, the regulation misleads employers into thinking they have “ownership” of the foreign workers, explained Udaya Rai, president of the Seoul-Gyeonggi-Incheon Migrant Workers’ Trade Union.

Subedi, another Nepali worker here, starts work at 4:30 a.m. For him, there is no break nor designated mealtime. At a random hour, he quickly grabs lunch and continues working until 7 p.m.

For working 14 hours a day, he has been paid 1.9 million won a month after a deduction of 1 million won every month since he began working seven months ago. However, his employer has not told him the reason for the deduction.

“On paydays, the employer would come by and scold us or curse at us for no reason. They also discriminate (against) workers and bully us,” Subedi said. “The worst part, still, is that they are not paying us right, and I want to move my workplace. So please let me.”

With language and cultural differences standing as barriers, the migrant workers are often ill-treated but have difficulties in taking actions to claim their rights.

Marking International Migrants Day on Tuesday, labor unions and human rights groups took to the streets Sunday to demand the Korean government revise the labor policy to a “Work Permit System” to protect the labor rights of foreign workers.

“The Korean government made this slave system called EPS that has only created unstable temporary work for foreigners,” Al Mamun, a senior vice president of the labor union, said at the rally.

“Koreans do not work in factories inhaling dust day and night. The migrant laborers do the work that Koreans do not want to do. But the foreign workers cannot say anything when their wage is unpaid, or when they are unfairly treated, because they can easily lose their visa.”

Myeong Sook, a member of a special committee celebrating the 70th anniversary of the Universal Declaration of Human Rights, urged Korean society to understand the reality.

“The migrant workers are hated by Koreans and are attacked as job thieves. Migrant workers are also subject to hatred against their races and religions,” Myeong said. “It is time society correctly understands the reality and for the government to come up with proper legal measures.”

Regarding the complaints that have been raised for decades, the Labor Ministry maintains that the purpose of the program is to resolve the lack of manpower for domestic industries.

“The foreign workers sign contracts before coming to Korea, and it is inevitable that some limits exist for them,” Hwang Jeong-woo, an official at the Labor Ministry, told The Korea Herald, adding that the Constitutional Court in 2011 ruled it is not a violation of rights to regulate foreign laborers in changing their workplace.

“The Korea labor law does not discriminate the employees by their nationality. A foreigner can also file a complaint when their workplace violates the labor law.”

Admitting there are cases of mistreatment, Hwang explained that the ministry is working to improve the system. From next year, migrant workers will be able to request changes of workplace for a longer list of reasons.

The ministry is reviewing accepting requests to change workplaces when the foreigners are sexually abused, not only by their employer, but by co-workers or others, starting next year.

As there have been many complaints about shoddy accommodations and living conditions, the ministry said it is also looking to set a standard employers would have to meet. If not, the workers would be able to file a request to move, the official explained.

For the first time since the program was implemented, the ministry published a labor manual for foreign workers in early December, which explains how to deal with mistreatment at work, in 16 languages. The manual is to be distributed to employment centers where foreign workers are trained before being dispatched to their contracted workplaces.