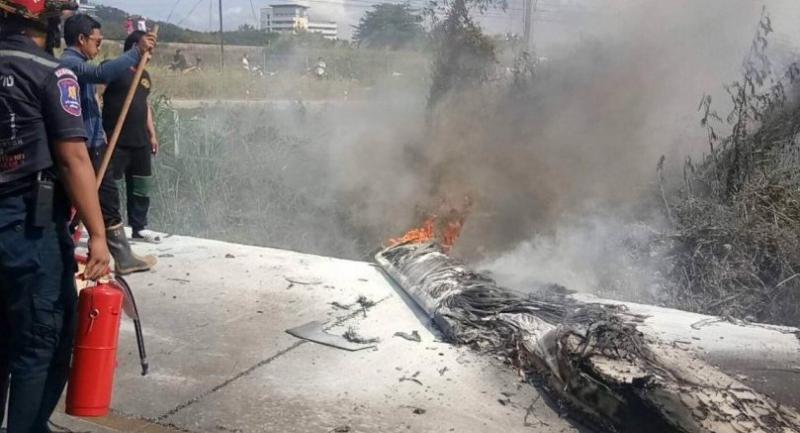 Civil Aviation Authority of Thailand (CAAT) officials on Monday inspected the wreckage of a private light aircraft that had crashed in Chon Buri’s Sri Racha district on Sunday afternoon, causing a blaze that killed the 60-year-old pilot, Mike Romberg from South Africa, at the scene. The turboprop crashed to the ground when it was about to make a landing at Rajamangala University of Technology Tawan-ok’s small-plane airport in Tambon Bang Phra, with the pilot immediately engulfed in the ensuing fire. Sakrin Amaraporn, an official from the airport who took a video clip of the incident, said the small plane’s reserve jet-fuel container may have contributed to the fatal, fast-spreading fire.

“It [the crash and subsequent blaze] happened very fast, bellowing out smoke as high as a three-storey building,” he said, adding that he and the victim’s friends were in a state of shock and grief over what had happened.

Nanthachat said that, while the deceased pilot’s body had been sent for autopsy at the Police General Hospital’s morgue in Bangkok, the investigation into the cause of the crash was ongoing and witnesses, including Romberg’s friends, would be interviewed.

Veena said her team would gather related information for analysis and conduct a simulation of the crash in an effort to determine the cause.

As it was a small aircraft, there was no black box to help in the crash investigation, she added.