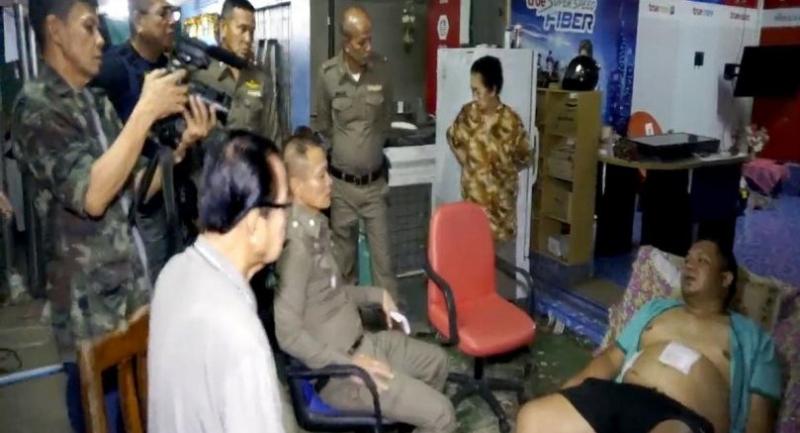 By Prasit Leelahakhunakorn
The Nation

A 41-year-old Thai man shot dead six relatives including his two children aged 6 and 9 before turning the gun on himself during a countdown party at their home in Chumphon's Pato district on Monday night. Police were alerted to the shootings at 00.20am and, along with forensic officers and rescue workers, rushed to the scene – a house in Tambon Pato, the front section of which serves as a salon. There they discovered the bodies of Wichit Nakhlod, 50, Ratchaporn Onmuk, 50, and Ngud Onmuk, 71, among fallen tables and chairs with food and drinks inside the salon and further in the house, found the bodies of Pakamard Onmuk, 47, Chananthida Sornsang, 6, and Kasidit Sornsang, 9. Thinnakorn Onmuk, 33, who sustained a gunshot wound to the stomach, was rushed to Pato Hospital.

The body of the gunman, Sucheep Sornsang, 41, was found in a bedroom with a single gunshot to the head suggesting he had committed suicide after shooting his relatives dead with a 9mm pistol.

Thinnakorn told police that they were having a New Year party at the house when Sucheep, his brother-in-law, turned up. He was drunk and started complaining that he had never accepted by the family even though he had helped them and wanted to settle the matter once for all.

Sucheep then pulled out the gun and shot the relatives. Thinnakorn said he pretended to be dead after being hit in the stomach while Sucheep went into the bedroom where he committed suicide.

Deputy provincial governor Somporn Patchimphetch, who inspected the scene at 1.30am told reporters that the murders appeared to have been committed in a fit of rage. He added that Sucheep - who was married to the family’s other daughter Boonnyanuch Sornsang, 37, was resentful at the family’s alleged hostility towards him. Boonnyanuch was not present at the party.

Somporn said Sucheep was released in November from the Nakhon Si Thammarat Prison where he had been jailed for three years for attempted murder. It was reported that he was unemployed, often drunk and had on many occasions threatened to kill the family.

Police will continue to investigate and will also interview Boonyanuch.