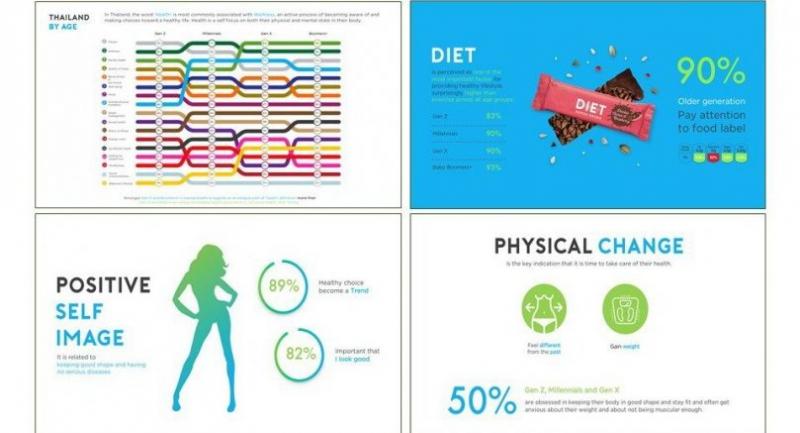 The study among a representative sample group of 500 respondents revealed interesting insights into modern-day consumers who live in the changing world and economic fluctuations.

It delved into four contextual topics that affect the health of Thais today – Health Definition, Reasons for Not Being Healthy, Treatment, and Health & Technology.

Being physically healthy is no longer enough today. Results from the new study revealed that the definition of being healthy has expanded from simply not being physically ill to encompass things such as mental health, sexual health, mindfulness and work-life balance.

Among Gen X and baby boomers, mental health is regarded as an integral part of “health” definition – more so than Gen Z and Millennials, whose immediate health association is “physical health” and “fitness”.

Good diet, including making choice of healthy food and paying attention to food label, is perceived as the most important factor for a healthy lifestyle and surprisingly higher than exercise.

For Thais, a key motivation to leading a healthy life is to maintain a positive self-image, which is related to staying in good shape and having no serious diseases, with 82 per cent of the respondents saying that it was important that they look good.

Meanwhile, 50 per cent of Gen Z, Millennials and Gen X are obsessed with keeping their bodies in good shape and staying fit. They often get anxious about their weight and about not being muscular enough.

Eighty-nine per cent of all respondents admitted that making healthy choices has already become a trend.

What do Thais think are key reasons for not being healthy?

Ninety per cent believe environmental issues could affect their health rather than blaming their personal behaviour. The government is also expected to step up and take care of the people.

Money or personal finance is another key factor leading to stress (58 per cent), similarly to the rest of other countries, such as Australia (52 per cent), China (42) and Indonesia (60).

This in turn directly affects their health and traps them in an endless cycle of making money to fix their health, starting with insufficient income to make ends meet, leading to mental stress and then physical and mental illnesses and the need for treatment that they have to pay for, and more rounds of exactly the same things.

Moreover, Gen X tends to have the most stress in all aspects of life.

When sick, Thais treat themselves with an over-the-counter pain, flu or cold reliever rather than prescription medication.

Millennials (66 per cent) and Gen X (73) often quickly treat themselves with a common painkiller, which are relatively higher percentages than in other generations.

They also take “natural” medicine as an option.

Another strong trend sees online solutions complementing offline advice for all ages: 46 per cent of baby boomers would visit clinic and research more about their symptoms online while Gen Z (30 per cent), Millennials (27) and Gen X (25) would look for advice from social media, and Gen Z (19) would prefer to chat with doctor online.

Buddhism also has a positive influence on our health, as evident from the findings that Thais have the highest rates of meditation and therapy in both the physical and emotional aspects.

Today’s technology has strong potential in keeping people healthy, but education in what and how is needed, along with reassurance of data security.

More than half of the sample in this study do not currently use health applications to track their health, even in highly-developed countries such as Japan.

Among baby boomers in Thailand, 78 per cent do not use apps to track health.

The key reasons for not using app vary by age. For example, the lack of knowledge in what these apps do, and how, as well as trust in doctors over technology are the key reasons among older generations. Millennials (56 per cent), Gen X (47) and Gen Z (44) are the key potential user-groups of health applications.

Those who use apps, however, believe that if used correctly, the apps help them achieve goals according to their health definition. They use health apps to track their fitness, weight, heart rate and diet and/or daily nutrition.

Moreover, 87 per cent believe technology could help them be healthier than currently and 81 per cent prefer to track their health at home rather than visiting a doctor.

The “Well Economy” conditions of Thais in micro-segment level is a key index of the nation’s strength and stability. Physical and mental health of the people is a sum of the interrelation between degree of people’s well-being, the nation’s economic growth, gross domestic product and social conditions at macro level.

To build a “quality nation”, there’s a need for “quality people”, especially in the fast-changing, highly-competitive world of today’s time.

Therefore, staying abreast of health across physical, mental, sexual health as well as mindfulness and work-life balance is becoming a top agenda, calling for all sectors and every Thai individual to promote a healthier life before health issues develop into a prevalent cycle of “gone-broke, stressful and ill” people, which can ultimately affect the nation’s security at large.