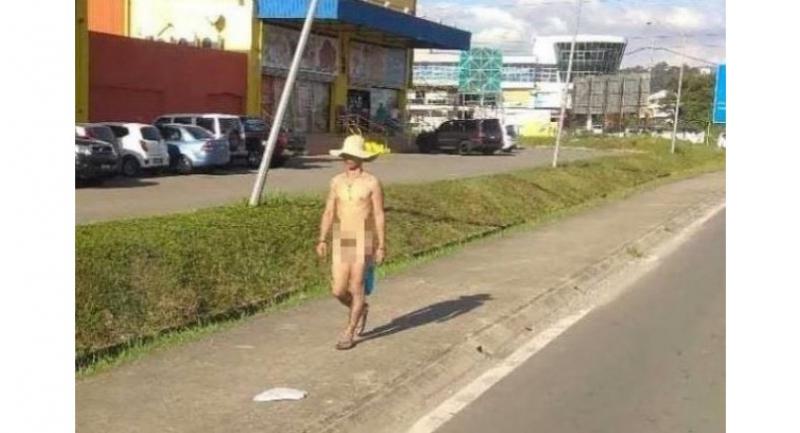 KOTA KINABALU: A naked man who was only wearing a wide-brimmed hat was caught on camera walking along a road near Pavilion Bundusan in Penampang, Sabah.

This comes after a couple were photographed skinny-dipping in a water fountain in the famous Gaya Street near here.

The photo of the naked man was circulated via WhatsApp on Thursday (Jan 10). It is not known when the photo was taken, who the man is, or whether he is a local or a tourist.

In one of the many chat groups where this photo was circulated, a user said: "I know the weather is hot now, but no need to go naked".

Penampang police, when contacted, said they were investigating the matter.

No reports have been received on the matter so far.

It was earlier reported that a couple, believed to be tourists, were seen topless and hugging each other in a fountain in a roundabout along the street in the central business district here.

However, it is not known when the picture was taken, although it is widely believed to have been sometime around midnight, after most of the businesses in the area had closed.

Of late, tourists have stirred anger among locals due to their antics, from going topless at the summit of Mount Kinabalu to dancing in front of the city mosque.

The locals have urged authorities to take stern action against such errant tourists.