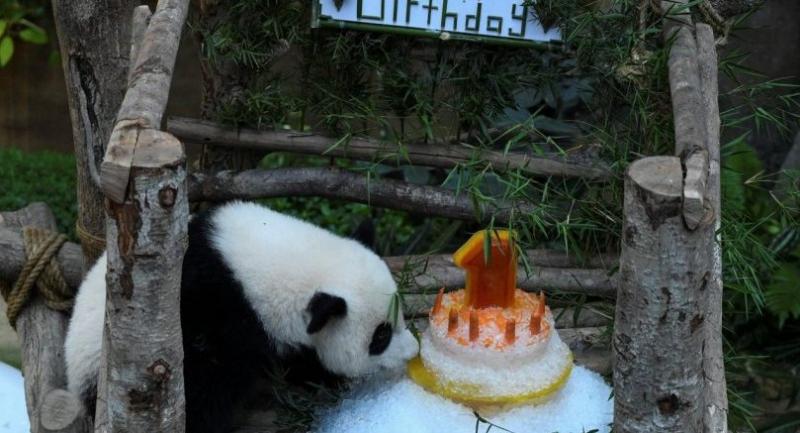 A female one-year-old panda cub sniffs her birthday cake during a celebration at Malaysia's national zoo in Kuala Lumpur on January 14.//AFP

Kuala Lumpur - A giant panda born in a Malaysian zoo celebrated her first birthday Monday with a cake made of ice in front of adoring visitors.

The youngster looked around shyly as a zookeeper carried her to a platform in her enclosure where the cake, which had a large number "one" on top, was waiting.

After nibbling at some carrots used to decorate the creation, the panda -- who has not yet been named -- seemed to tire of the celebrations, and fell asleep.

Currently weighing 34 kilos (75 pounds), she is the second cub born to Liang Liang and Xing Xing since they were sent from China to Malaysia in 2014, on a 10-year loan.

The first, Nuan Nuan, was born in August 2015 and sent back to China in 2017. Beijing and Kuala Lumpur have agreed that cubs born in captivity must go back to China at the age of two.

The pandas are kept at the national zoo's panda centre outside Kuala Lumpur.

It's estimated there are some 1,800 giant pandas left in the wild, living mainly in bamboo forest in the mountains of western China, according to environmental group WWF.