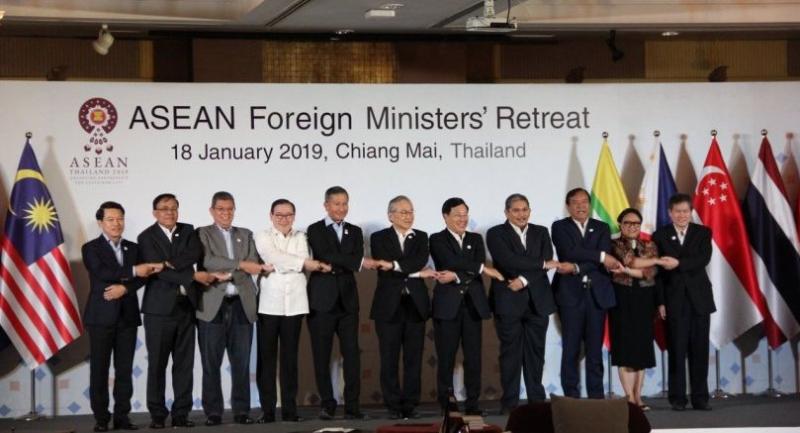 Thai Foreign Minister Don Pramudwinai, who chaired the meeting, told his colleagues that Asean was committed to helping Myanmar to solve the humanitarian crisis, according to an official who attended the working dinner.

Asean has commissioned its Asean Coordinating Centre for Humanitarian Assistance on Disaster Management (AHA Centre) to play a role in providing assistance to Myanmar and its displaced people. Asean foreign ministers at a working dinner on Thursday

Lim briefed the ministerial meeting on a need assessment mission he made in mid December and said the AHA Centre would be the main mechanism for mobilising assistance to the strife-torn Rakhine state.

More than 700,000 people have fled Rakhine since August 2017, following the attack on a security outpost that prompted Myanmar military’s clearance operation. The refugees have faced multiple atrocities, including torture, mass murder, gang rape and arson.

While the United Nations and United States raised their concerns over these actions, which some have deemed “genocide” against the Muslim Rohingya, Asean refrained from making any judgement on the issue and commented only the need for a humanitarian approach.

Asean’s foreign ministers then kicked off their “retreat meeting” on Friday to discuss a wide range of issues, including the contentious South China Sea and their strategies in both the Indo-Pacific and Korea Peninsula regions.

The ministers are expected to reaffirm the importance of maintaining and promoting peace, security, stability and freedom of navigation and flights over the contentious sea.

Many members of Asean have been at loggerheads with China over the South China Sea for years and Asean countries are now discussing with China the proposed text for a Code of Conduct to control the behaviour of all those states caught up in the territorial dispute. They expect to finish the first draft of the text to be completed this year.

However, some states claiming rights over territories in the disputes region are expected to raise their concerns over China’s land reclamations, which have eroded trust and confidence, increased tension and are in danger of undermining peace and stability in the region.