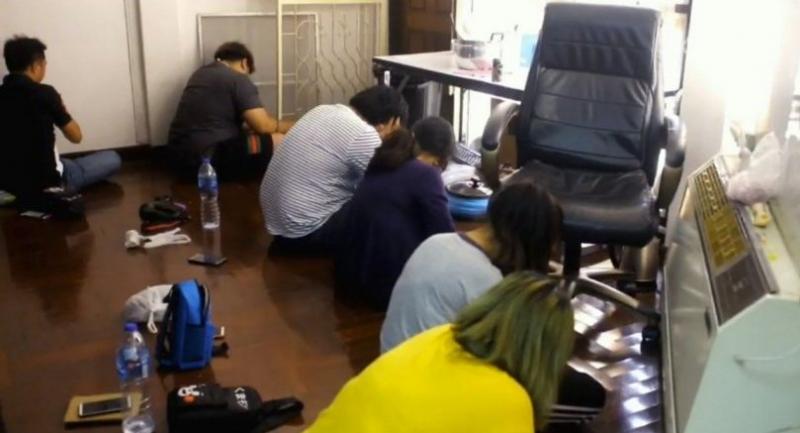 By Supachai Phetchtawee
The Nation

Crime-suppression police on Monday raided and searched a house in Bangkok’s Bang Phlat district under a court warrant on suspicion that it was being used as a venue to operate 818Kiss, an online gambling website. During the search at the three-storey house, located in Soi Boromrachachonanee 4, Boromrachachonanee Road, police found that it was equipped with security cameras at many spots on the outside of the building, and that electrical wiring had been set up at all windows on the third floor in an attempt to prevent any intrusion.

Once inside, police who searched rooms on the second floor found 10 computers and eight staff members, both men and women. Checking the computers, police reportedly found communications between gamblers and the staff via computer applications.

Confiscated during the search were bank books and a notebook detailing money coming in and going out.

Pol Maj-General Apichart Sirisit, deputy chief of the Crime Suppression Division, said the raid had been carried out following complaints from people for police to suppress online gambling.

Informants had tipped off the police that the house was being used for online gambling, including on football, baccarat and other card games, he said, adding that search warrants had therefore been obtained authorising the raid. It is estimated that the 818Kiss website has thousands of members, and that the money from gambling on the site runs into millions of baht per month.

Apichart said police had yet to investigate the ownership of the Bang Phlat property, and to establish whether there were other similar venues for 818Kiss online gambling elsewhere.

Investors in the business could be Thais and Chinese nationals, he said.

Police had also traced the house from an advertisement on Facebook inviting people to gamble, he added.