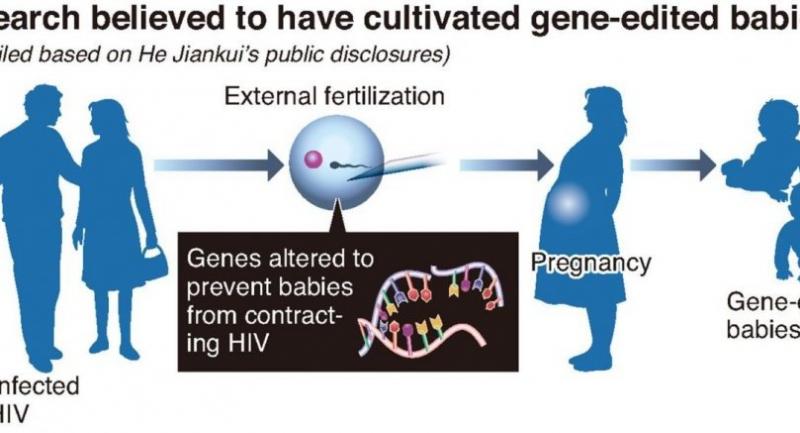 It is claimed that He, a doctor at Southern University of Science and Technology (SUSTech) in Shenzhen, Guangdong Province, modified the fertilized eggs through genome editing.

According to the Chinese media, the provincial investigative team announced the results of its preliminary investigation on Monday, concluding that He had raised funds on his own and organized a project involving researchers from outside mainland China from June 2016 to research human gene editing for reproductive purposes.

The research was conducted between March 2017 and November 2018 on eight volunteer couples in which the husbands had contracted HIV. Two women eventually conceived babies from the genome-edited eggs. One of the women gave birth to twin girls, while the other is still pregnant. An ethical review certificate needed to approve the research had been fabricated.

He, others involved and participant organizations will be dealt with in line with laws and regulations, the source said.

The media also reported that public security authorities will be in charge of probing the case to determine the legality of his action.

As to the twins and the pregnant woman, the Guangdong Provincial government expressed an intention to conduct medical observations and follow-up inspections on them in cooperation with a relevant organization.

In response to the investigation, SUSTech released a statement on Monday saying that the university would sever its professional ties with He.

If the investigation’s findings reported by Xinhua are accurate, it would mean that the twins are the world’s first gene-edited babies. The findings prompted criticism from biologists in Japan.

"It’s completely irresponsible of a scientist to conduct research without thoroughly reviewing ethical issues," said Yoichi Matsubara, director of the Research Institute of the National Center for Child Health and Development.

Hokkaido University Prof. Tetsuya Ishii, a bioethics specialist, said: "Gene editing could result in the birth of babies with congenital abnormalities. It’s also problematic from a human rights perspective to conduct such research based only on the consent of parents without regard for the child’s will."

He reportedly altered genes during the external fertilization process to prevent the babies from contracting HIV.

Genome editing enables researchers to efficiently alter genes, though it is feared that non-targeted genes could also be altered by accident. The effects of genetically modifying a fertilized egg can affect not only children but also their offspring. The technology can also engineer the birth of "designer babies" that possess abilities and physical characteristics desired by parents.

In Europe, genetically modifying fertilized eggs for the purpose of pregnancy and childbirth is illegal. This spring, the Japanese government plans to issue guidelines banning the transfer of genetically edited fertilized eggs into a woman’s uterus. The ban applies to clinical research into gene therapy and basic research that can support reproductive technology but does not apply to medical practices.

"The guidelines have no penalties and have limitations. It’s also important to warn parents not to carelessly participate in risky medical procedures," Ishii said.