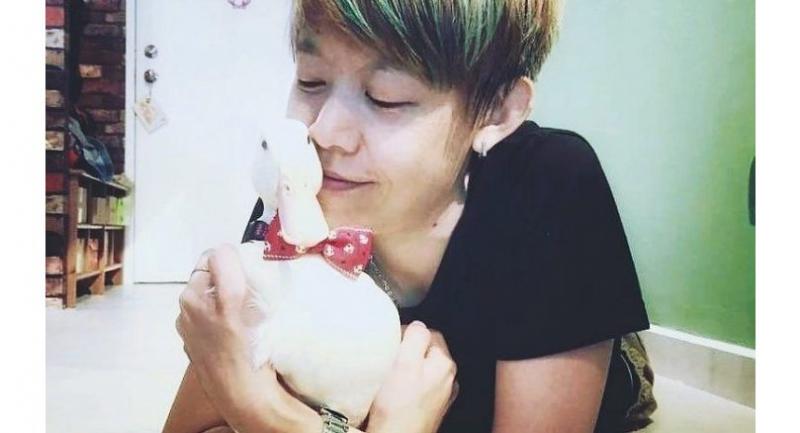 Lim with Daisy, which she hatched from a fertilised egg

MOST city dwellers who want pets will usually end up with four-legged furkids or something low-maintenance like a fish in a tank or a bird in a cage.

But Erica Lim decided to choose something quite different – a delightful little pet duckling.

As an adventurous creative professional living in a chic apartment right in the heart of KL city, Lim says her unusual choice of pet does attract a lot of attention from curious friends and strangers alike.

Since ducks are more commonly associated with farms, Lim says, “Most people are generally curious to know what it is like to be living with a duck in a high-rise building.”

Lim, 39, christened her new pet Daisy when she was born. But now calls her by a cutesy name – Bibit.

The most interesting story about Daisy, or Bibit, is actually how she came about: Lim actually hatched her own pet from a fertilised egg.

The egg from which Daisy hatched was sold in a Vietnamese cafe in Puchong, Selangor, where people ate fertilised bird embryos as a snack known as balut.

Lim bought one on a whim, and wondered whether there was really a duck foetus inside.

Then, curiosity got the better of her, so she constructed a makeshift egg incubator using a styrofoam box, and installed some heat lamps inside, and placed the egg in it.

After waiting patiently for two weeks, she ended up hatching a lovely new pet.

“Watching her emerge from the egg, I fell in love with her immediately. And that was how I became a ‘mother’ on Father’s Day in 2017,” beamed Lim, who works as an insurance agent and does freelance art projects on the side.

“She is a very cute buddy who loves to keep me company and follows me wherever I go. She also gets along well with my old dog. Bibit and Feipo are the best of friends.”

From a ball of yellow fluff that fit snugly in her palm, the little duckling quickly grew into a soft and white feathery friend that is warm and huggable.

By the time Bibit was eight months old, she started to lay eggs. “She lays one egg every 25 hours. So, I now have an unlimited supply of eggs, many of which are double-yolked.

Daisy lays an egg every 25 hours, so her owner never runs out of duck eggs!

“I’ve made lots of salted duck eggs that I share with friends and family,” Lim quips.

“She loves water and often sneaks into the bathroom to splash around in a tub. If I leave a jug of water on the coffee table, she will get into it in no time at all.”

And when Lim unwinds after a long day at work, Bitbit sits quietly by her side, sometimes dozing off, while she reads a book or watches TV. “Bibit loves watching movies and we often enjoy movie marathons together.”

In fact, Bibit is so well-behaved that Lim has even managed to smuggle her into local cinemas for movie dates when she was little. “We’ve been to many places together. She is very friendly and adventurous.

“She is a city duck, so she knows how to enjoy city life, just like other ordinary city folk,” says Lim, adding that they watch movies on Netflix and listen to music on Spotify, just like other buddies do when they chill together.

And like a typical city kid, Bibit also has a social media presence with her own personal instagram account (@daily_daisy_duck). In it, you’ll see pictures of Bibit waddling about at home or wandering around in pet cafes which she loves to explore since she is always curious about new things.

Lim’s own Instagram and Facebook feed is filled with pictures and videos of her with her pet duck, captioned Kaka and Bibit. “Lots of people like her and they ask me about her all the time.”

Seeing how adorable her pet duck is, some of her friends went out and got themselves some ducklings as well. Lim even had a request from her neighbour, whom she helped to hatch a new pet.

“Ducks make wonderful companions. My Bibit is charming and attentive. I hope more people realise how much fun it is to have a duck as a pet.”

The Paper’s People is a fortnightly column about Malaysia-based everyday folk who do what they love. If you have someone to recommend, e-mail us at star2@thestar.com.my.