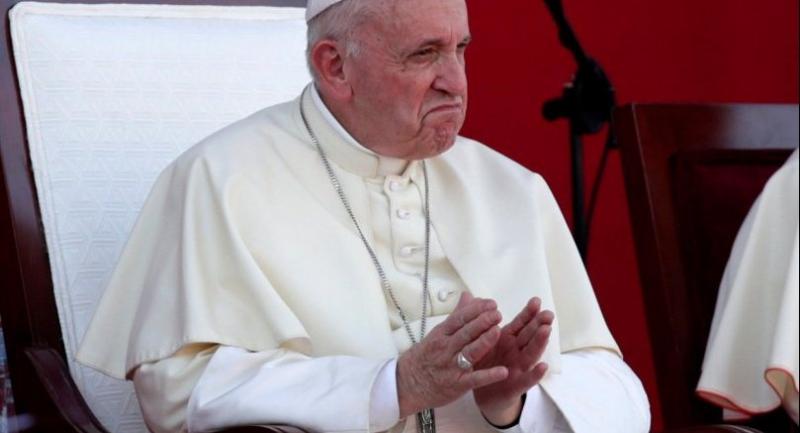 Malacanan Palace on Sunday meanwhile vowed to “pursue to the ends of the earth” the perpetrators of twin bombings that killed 25 people and injured 111 others.

"I reiterate my strongest reprobation for this episode of violence who is once again plunging the Christian community into mouning," Francis said during an Angelus message as he wound up World Youth Day celebrations in Panama.

The first bomb tore through the Cathedral of Our Lady of Mount Carmel around 8:28 a.m. on Sunday as Mass was being celebrated, followed by the second bomb, which went off in the parking lot of the church as security forces were responding.

Pictures on social media showed debris and bodies lying on a busy street outside the cathedral, which had been hit by bombs in the past.

Troops in armored carriers sealed off the main road leading to the church while vehicles were transporting the dead and wounded to the hospital.

Some casualties were evacuated by air to nearby Zamboanga City.

Among the wounded were 90 civilians, 17 soldiers, two policemen and two coast guards.

Malacañang condemned the attack as “an act of terrorism and murder” and vowed no mercy for the perpetrators.

“We will pursue to the ends of the earth the ruthless perpetrators behind this dastardly crime until every killer is brought to justice and put behind bars. The law will give them no mercy,” presidential spokesperson Salvador Panelo said in a statement.

He said “the enemies of the state boldly challenged the government’s capability to secure the safety of citizens in that region. The (Armed Forces of the Philippines) will rise to the challenge and crush these godless criminals.”

Sunday’s attack came nearly a week after minority Muslims endorsed a new and bigger autonomous region in Mindanao in hopes of ending nearly five decades of a separatist rebellion that had left more than 120,000 people dead.

Although most of the Muslim areas voted to approve the Bangsamoro Organic Law (BOL), the charter of the bigger and more powerful Bangsamoro Autonomous Region in Muslim Mindanao (BARMM), Sulu, rejected it.

The rejection, however, will not allow Sulu to be excluded from the BARMM because under the law, the dominant ARMM vote prevails.

But Sulu is also home to the Abu Sayyaf bandit group, blacklisted by the US and Philippine governments as a terrorist organization because of years of bombings, kidnappings and beheadings of foreign captives.

Octavio Dinampo, a peace advocate and professor at Mindanao State University, said on Sunday the Abu Sayyaf could have carried out the attack in retaliation for losses suffered in clashes with government forces.

He said the military then closed the street along which the cathedral was located but reopened it after about 20 days following public complaints.

“Now we have this very brutal and grisly attack inside a church. This is an act of reprisal and plain and simple terrorism to sow fear among civilians,” Dinampo said.

The Catholic Bishops’ Conference of the Philippines (CBCP) condemned the attack as “an act of terrorism.”

“We condole with the families of the several soldiers and civilians who were killed by the explosions. We also express our sympathies with those who were wounded and extend our solidarity with the rest of the churchgoers inside the cathedral and the rest of the church community in the Apostolic Vicariate of Jolo,” Archbishop Romulo Valles, the CBCP president, said in a statement.

Witnesses said the first blast inside the cathedral sent churchgoers, some of them wounded, to stampede out of the main door.

Army troops and police posted outside were rushing in when the second bomb went off about a minute later in the parking lot near the main entrance, causing more deaths and injuries.

The military was checking a report that the second bomb might have been placed in the utility box of a parked motorcycle.

Full force of the law

The initial explosion scattered the wooden pews in the nave and blasted window glass panels. The second bomb hurled human parts and debris across the square fronting the cathedral.

“I have directed our troops to heighten their alert level, secure all places of worship and public places at once, and initiate proactive security measures to thwart hostile plans,” Defense Secretary Delfin Lorenzana said in a statement.

“We will use the full force of the law to bring to justice the perpetrators behind this incident,” Lorenzana said.

Security officials were looking “at different threat groups” and could not say immediately whether the attack had something to do with last week’s plebiscite, the chief of the Philippine National Police said in a radio interview.

PNP Director General Oscar Albayalde said investigators were looking at possible Abu Sayyaf responsibility, including links to the vehicle bomb that went off near a military checkpoint in Lamitan City on July 31 last year that killed 11 people, including militiamen and their relatives.

That explosion was attributed to the Abu Sayyaf faction led by the bandit Furuji Indama, and the driver of the bomb-rigged van was reported to be a Moroccan.

“[Sunday’s attack] is possibly related to the Lamitan bombing because, based on intelligence information gathered by our ground forces, the threat coming from [Indama’s] group is high,” Albayalde said.

“This bomb attack was done in a place of peace and worship, and it comes at a time when we are preparing for another stage of the peace process in Mindanao,” Hataman said.

“Human lives are irreplaceable,” he added, calling on Jolo residents to cooperate with the authorities to find the perpetrators of this “atrocity.”

Fr. Jefferson Nadua, the parish priest of Mount Carmel, appealed for prayers and called for justice.

“We pray for the safety of those who are wounded and we pray that there’ll be no more casualties among our parishioners who were attending Mass when the incident happened. Pray for us,” Nadua said on Church-run Radio Veritas.

He called on the authorities to find the perpetrators and bring them to justice. Jolo Mayor Tan was angry over the security breach.

“We have been reporting to the military and the police about bomb threats and I cannot understand why a highly secured place like the cathedral could be bombed by the Abu Sayyaf. The cathedral is surrounded by security forces,” Tan said.