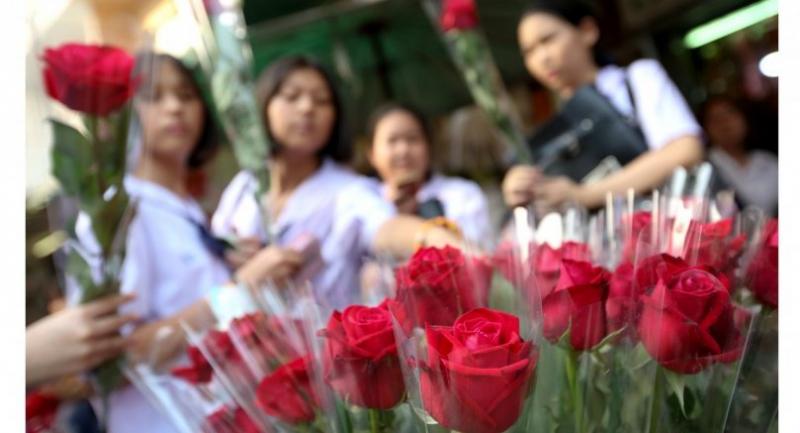 As a red rose remains the popular Valentine's Day gift but the price is pushed higher due to a big demand, many people especially youths are shopping for single roses rather than bouquets.

The price of roses had doubled from that of the past two years just days ahead of this year’s Valentine’s Day, vendors in Phayao said on Wednesday, while their counterparts in Chiang Mai echoed their observation, citing that the popular Valentine’s gift was retailing for Bt70, up substantially from last year’s Bt50.

Having seen a 50 per cent drop in rose bouquet orders, Sasirpreeya Songsi, owner of Sasi Florist Shop in tambon Ban Tom, said suppliers were selling roses at nearly double the price of recent years – for Bt300-Bt350 per set or Bt20 per rose. The jump was due to the expected high demand, said Sasirpreeya, along with the hot, cold and rainy February weather conditions that caused roses to grow slowly and to be less beautiful.

Salungtong Florist Shop owner Panu Boontham said the shop received about 100 orders for rose bouquets – a 50 per cent drop from last year – during February 10-13. Although roses were expensive, he would maintain the regular price in order to keep the shop’s standard, Panu said.

Vendors at Phayao Arcade Market said they sold roses at Bt10-20 apiece, but were carrying a limited number to sell due to their supplier’s price hike. They would slightly increase the price to Bt20-30 on Valentine's Day itself to ensure no losses, but recognised that people may not be able to buy them if the cost went beyond this range.

In Chiang Mai’s Muang district, many people showed up to shop for flowers at Ton Lam Yai Market where vendor Ploenjai Janthaen said red and white roses were most sought after. Individual roses carried a tag of Bt70, compared to last year’s Bt50, while rose bouquets ranged from Bt300-2,000 and special mixed-colour roses fetched Bt150 apiece.

In Bangkok, flower vendors at Pak Khlong Talad wholesale market hiked the prices for local roses to Bt30-150 depending on the grade, and for imported roses to Bt300-2,000, with those from the Netherlands, Kenya and Japan carrying higher tags because of their large size and bright colour.

The price hike was due to higher costs demanded by suppliers as well as increased transport expenses, they said. Fewer people had showed up to shop for roses this year, possibly due to the economic slowdown, they said.