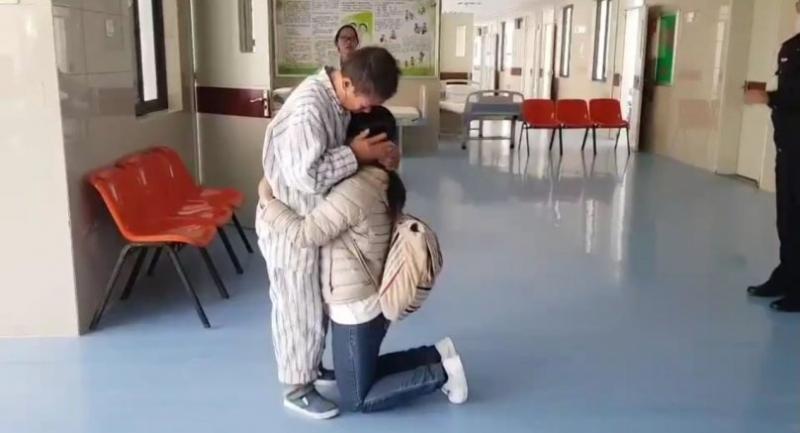 A 35-year-old Chiang Rai woman has been tearfully reunited with her 59-year-old mother, who suffers from Alzheimer’s disease and depression, after she went missing for eight months.

The woman was found by police this week as she wandered on the R3A Highway in Kunming City in the southwest China province of Yunnan.

Suchada Ajor tearfully embraced her mother, Kaewmanee Ajor, as they finally saw each other again at the local hospital on Thursday, the day after Thai Immigration Police had arranged for Suchada to fly to China from Chiang Rai to fetch her. Kaewmanee had reportedly travelled on foot on the highway which links Chiang Rai to Laos and China’s Kunming City after her disappearance from home in Muang Chiang Rai, Immigration Bureau chief Pol Lt-General Surachet Hakpal said.

The distance from Chiang Rai to Kunming is about 650 kilometres. When Chinese police found Kaewmanee, she was still carrying her Thai ID card and was unwell, so they contacted the Thai Consulate-General Office in Kunming.

Surachet said his agency had helped raise the money for Suchada’s trip, some of which came from police officers chipping in with donations of their own. This was done for humanitarian reasons he added, because Suchada works as an minimum wage-earning employee at a golf course and could not have afforded to pay for the flight herself.

He said the Thai Foreign Ministry also helped by issuing passports for both women, while the Chinese Consulate-General Office in Chiang Mai helped with the granting of visas.

Immigration 5 Division chief Pol Colonel Pong-anan Klaikleung will welcome the two women and an accompanied official upon their return this afternoon to Mae Fah Luang Airport in Chiang Rai.