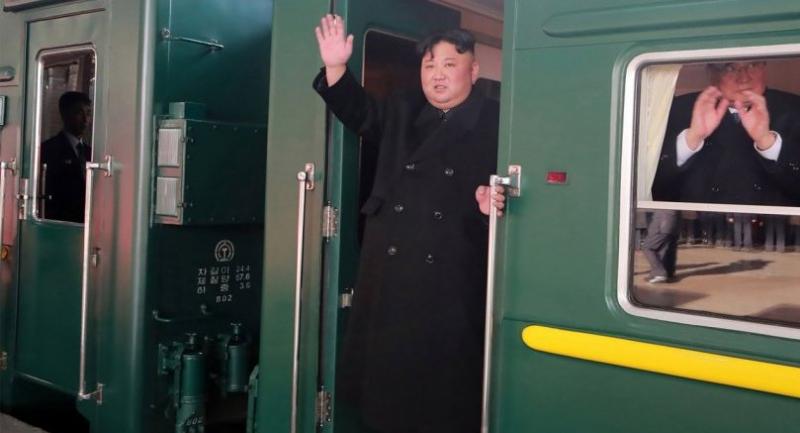 North Korean leader Kim Jong-un is on his way to Hanoi, Vietnam, for his second summit with US President Donald Trump this week. While every movement of the isolated communist leader is a subject of attention, questions have been raised as to why Kim has chosen a 60-hour train ride, over a plane journey that would take just three or four hours.

Kim started off on his long train trip Saturday afternoon, departing from Pyonngyang’s train station at around 4:30 p.m.

From Dong Dang Station in Lang Son Province, it will take about three hours to reach Hanoi by car. The straight-line distance between Pyonyang and Hanoi is 4,500 kilometers.

Experts believe one of the reasons Kim is taking a train to Hanoi is because it is how his grandfather, Kim Il-sung, North Korea’s founder, traveled for his visits to Vietnam in 1958 and 1964, using airplane and train to reach Hanoi via China. Kim is often seen to replicate his grandfather to reinforce the idea that he is a successor of the Kim regime.

As the train passes through China, the trip is also viewed as a way for North Korea to boast its close ties to its ally.

The armored train is also thought to be a safer choice for Kim, as North Korea’s state jet Chammae-1 is old and there is a lack of experienced pilots.

The Chammae-1 is a Soviet-era IL-62M, that is capable of traveling up to 10,000 kilometers. When Kim traveled to Singapore by plane for his first summit with Trump in June 2018, he did so on a plane borrowed from the Chinese government.

Tak Hyun-min, the former protocol presidential aide for South Korean President Moon Jae-in who recently returned as an adviser, said having the leader take a train was an “excellent choice” of the North Korea’s protocol team.

“First, they made Kim’s transportation the news. They have created enough stories with their soldiers lined up in train stations, and with the historical meaning of travelling by train from North Korea to Vietnam,” Tak wrote in his Facebook post on Monday.

“And having the world, and us, witness the simple fact that the railroad in Pyongyang is connected all the way to Vietnam, it excites us with thoughts that a train that departs from Busan would be able to pass through Pyongyang to reach Southeastern Asian countries, including Vietnam.”

The train Kim is on is often referred as a “special hotel” that can move. The train, which has a label DF-0002 differs from the model that his father Kim Jong-il took, which had the label DF-0001. It is reportedly said that the special train is built with high-level of security facilities and a very hotel-like interior.

Kim is expected to arrive in Vietnam on Tuesday. Reports speculate that Kim may also stop at other areas in Vietnam on his way to Hanoi, to inspect some of the indutrial sites there.

The summit between US President Donald Trump and Kim are scheduled on Wednesday and Thursday, but details have not been released.