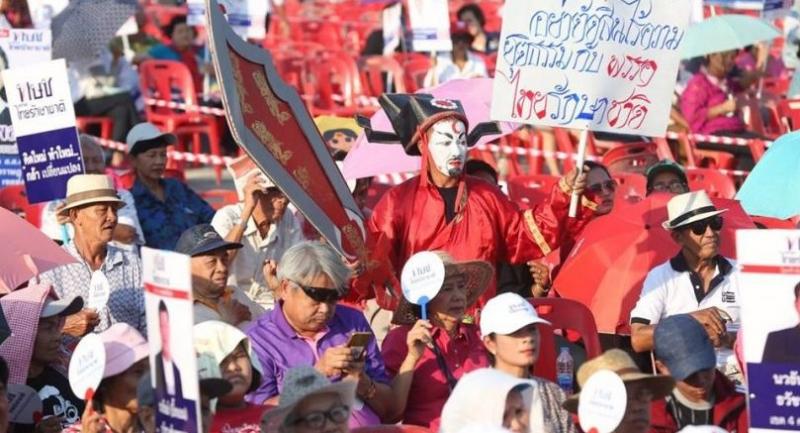 While others have criticised the Election Commission’s decision to take the Thai Raksa Chart Party to the Constitutional Court to seek dissolution, former commissioner Somchai Sriwatanayakorn on Friday hailed the agency’s “courage”. Taking the case to the court at a later date could have brought about much political confusion, he said.

Speaking to the public forum “Thai Raksa Chart Party’s Possible Dissolution” held at Foreign Correspondents' Club of Thailand, Somchai said the EC commissioners may have put themselves at risk and could have to take responsibility for an “undesirable outcome” by rushing to take the case to court.

Drawing on his experience as a former commissioner, Somchai noted that should normally take from 15 to 30 days or more for a sub-committee to work through a case before the commission could make a decision.

Somchai said a case that took only one or two days for a decision, as occurred over Thai Raksa Chart’s possible dissolution, was rare. However, by not using a sub-committee to help determine the case, the EC could be putting themselves at risk, he added. Public criticism has been largely focused on the commission, with commentators arguing that it demonstrated discrimination against the anti-junta party, and had skipped steps in a proper process in a rush to get the party dissolved.

Somchai disagreed, and suggested that the sooner the case ended, the better.

The rush meant that the Court could bring down a verdict before the March 24 election, he said, and that would be the “best scenario”. The case would be ended without any further questions, the former commissioner said.

If the verdict to dissolve Thai Raksa Chart was instead issued after the election, much turmoil would ensure, Somchai said. He raised two additional scenarios.

In his first and “most difficult” scenario, the judgement could come after the election but before the EC endorsed the election results. Nobody would know for sure how to proceed or what to do with the votes already cast for the dissolved party, or whether a by-election should be held, he said.

And in a final scenario, the Court’s verdict would be issued after the EC’s endorsement of the election outcome. This could lead to political uncertainty as the successful MP candidates could rightfully claim their titles but would have to seek affiliation with other parties, said Somchai.

The difficulty in that scenario would lie with the choices made by the successful candidates, said Somchai. Would they move to other pro-democracy parties or would they change sides, Somchai wondered.