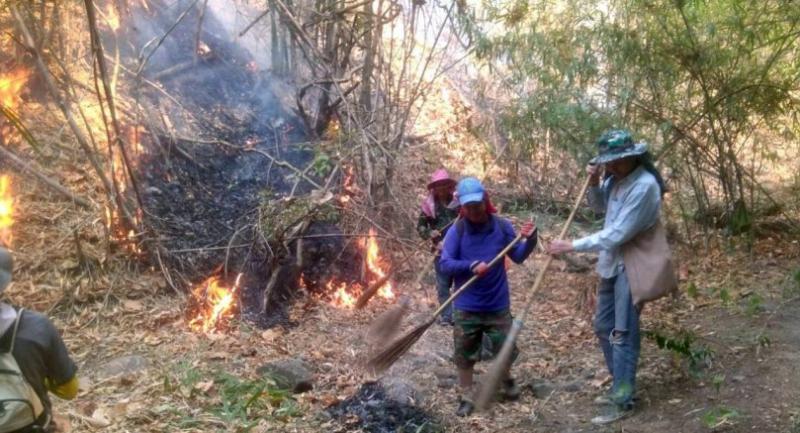 Nearly a quarter-million people in the North sought medical treatment for four different kinds of ailments that flared up amid intense air pollution between February 17 and 23. The Office of Disease Prevention and Control 1 in Chiang Mai on Monday put the figure at 248,618, including high numbers of respiratory complaints among children under four and cardiovascular concerns among adults over 60.

It said the prevalence rate for respiratory ailments was 315.8 per 100,000 population, cardiovascular complaints 250.6, inflamed skin conditions 25.9 and eye irritation cases 22.18.

Forest fires and fires deliberately set to clear cropland continue to be major contributors to the haze. With 95 hotspots reported as of Sunday, the Pollution Control Department (PCD) on Monday morning put the 24-hour average of PM2.5 – airborne particulates 2.5 microns or less in diameter – between 28 and 84 micrograms per cubic metre of air in nine provinces.

The tambon of Jong Kham in Muang Mae Hong Son was worst off at 84mcg, followed by Phra Baht in Muang Lampang at 67 and Wiang in Muang Phayao at 66.

Near Regional Health Promotion Centre 1 in Chang Klan, the levels were 101mcg and AQI 211. Near True’s regional office in Nong Pa Khrang, they were 108mcg and AQI 219.

The Geo-Informatics and Space Technology Development Agency’s fire-monitoring system, found online at fire.gistda.or.th, identified 280 hotspots on Sunday across Thailand, most on farmland.

Area officials, vowing to strictly enforce a ban on entering forest reserves, warned people not to light campfires in woods because so many had already run out of control, destroying hundreds of rai of trees and killing wildlife.