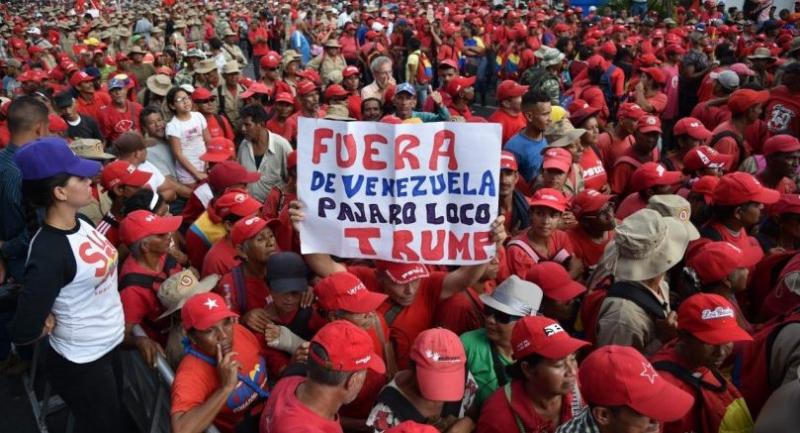 Supporters of Venezuela's President Nicolas Maduro hold a banner that reads 'Out of Venezuela Woody Woodpechker Trump' during a rally at the Miraflores Presidential Palace in Caracas. Photo/AFP

As the United States has quickly ratcheted up sanctions against Venezuela to pressure Nicolas Maduro, bankers say they are shying away from doing even legitimate business with the crisis-wracked oil-producing country for fear of getting caught in the crossfire. The sanctions target a growing list of individuals and companies linked to the Maduro regime -- including state oil company PDVSA, the lifeblood of the Caribbean nation's crumbling economy.

But because the penalties are complex and the cost of a violation is so high, some banks are beginning to avoid doing any business with Venezuela at all, said Daniel Gutierrez, head of the Florida International Bankers Association's anti-money laundering committee.

Banks must review each transaction and examine the sanctions one by one, consulting lawyers to verify exemptions and requirements, at the risk of being hit with a fine of more than $1 million by the US Treasury Department if they get it wrong, Gutierrez told AFP.

That not only presents a challenge for banks and businesses but for families in the United States, many in Florida, who send money to relatives left in Venezuela to help them weather the nation's widespread food shortages and hyperinflation that could reach 10 million percent this year.

As a result, "there are many major banks in the United States that have made the decision to decouple from Venezuela," said Gutierrez, who works with 60 domestic and international banks in Florida.

Washington targeted PDVSA in sanctions announced January 28 but granted a handful of exemptions, such as one that allows the banks to work with US oil industry giants Chevron and Halliburton, but forbids transactions involving diluents -- chemicals used the thin the heavy crude that dominates Venezuela's reserves.

"How am I supposed to know, as your bank, if for example a wire transaction is for the purposes of exporting a diluent?" Gutierrez asked. "The banks find themselves in a situation where they have to do a cost/benefit analysis on their clients."

But the potential vacuum opens opportunities for some banks willing to take the risk, especially in the massive market for remittances.

Martin Litwak, lawyer based in Miami who specializes in offshore investments and anti-money laundering regulations, said the banks could begin "de-risking" -- cutting off all operations -- if the Venezuelan crisis is prolonged.

Otherwise, banks will "try to combat the situation and not take any drastic measures," Litwak told AFP.

"This is a business opportunity," he said. "If a lot of banks back off, then some will continue doing transaction because they will be able to charge more or have more business" including handling remittances.

Manuel Orozco of the Inter-American Dialogue told AFP there was a conservative estimate showing $2.2 billion was sent to Venezuela from abroad last year and of that an estimated $650 million was from the United States.

Christine Savage, a partner at the law firm King & Spalding, said the US Treasury was "acting quickly" to roll out sanctions as the situation in Venezuela was changing rapidly.

But now they are "working out some of the unintended consequences of the rapid moves."

The Venezuelan firm Ecoanalitica estimates 80 percent of cash payments from the country's oil sales come from trade with the United States, since exports to Russia and China are primarily used to pay off debt.