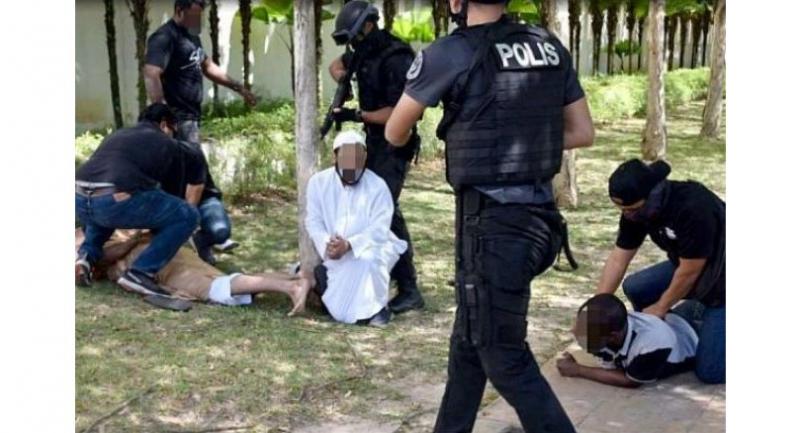 KUALA LUMPUR: When an Egyptian man moved to Serian, Sarawak, and opened a restaurant, local folks were puzzled. The town, some 65km from Kuching and only a 45-minute drive to the Kalimantan border, has little to no Arab population.

He even married a local woman, a 54-year-old single mother.

On Feb 2, he was among three people, including two Malaysians, detained by police in a raid against terrorists.Yesterday, the Inspector-General of Police Tan Sri Mohamad Fuzi Harun said the group had harbou­­r­ed an operative of Ansar Al-Shariah Al-Tunisia, responsible for the mass killing of 38 people, mostly British tourists, in Sousse, Tunisia.

No more place to hide: Counter Terrorism Special Unit officers apprehending a suspected militant during several raids made in Klang Valley and Serian in Sarawak. Nine individuals aged between 20 and 54 were arrested during the raids.:  Bernama

“They also did not disclose the fact that an Ansar Al-Shariah Al-Tunisia operative had transited in Malaysia.

“Not only did they harbour the operative, they also arranged for lodging, work and flight tickets,” said Mohamad Fuzi during the press conference.

The Egyptian’s move to open a restaurant and marry for spouse visa is increasingly becoming the modus operandi for these foreign terrorist fighters (FTF).

According to the IGP, foreign militants from various terror groups all over the world are using Malaysia as a safe haven and transit point before planning large scale attacks on a third country or even Malaysia – and they are getting sneakier as well.

Entering the country on either real or forged documents, some are willing to be patient and bide their time.

“The Counter Terrorism Division found that these militants are marrying locals so that they can get spouse visa.

“They also gain entry into Malay­sia on the pretext of conducting business and for further studies,” he said.

Their ruse, said Mohamad Fuzi, was uncovered following the arrests of the three in Serian as well as six others in Klang Valley between Feb 2 and 9 – six Egyptians, two Malaysians and a Tunisian.

The other Egyptians have either worked as teachers or posed as college students in the country.

“Five of the Egyptians detained admitted to being members of the Ikhwanul Muslimin (Muslim Bro­ther­hood), acting as facilitators in preparing accommodation, transport, work as well as plane tickets for two Ansar Al-Shariah Al-Tunisia members.

“We have previously arrested and deported two other Ikhwanul Muslimin members in April and November last year,” he said.

One of the Egyptians, a 42-year-old man detained in Setapak, had connections to both Islamic State (IS) and Al-Qaeda members arrested in Kuala Lumpur last year while the 28-year-old had facilitated tra­vel for terror militants, he said.

He said another Egyptian and the Tunisian – members of the North African-based terror group Al-Sha­riah Al-Tunisia – were once arres­ted for trying to enter an African country illegally.

The entry of foreign terrorist fighters, said Mohamad Fuzi, was a very serious threat, especially after IS’ defeat in Syria and Iraq.

“Their presence will make Malay­sia as a transit point for attacks on other countries or even Malaysia,” he said.

All foreign militants have since been deported while the Malaysians were held under Security Offences (Special Measures) Act 2012.

A source said the presence of FTFs was a clear and present danger to the country’s security and sovereignty, given that they ma­­naged to slip into the country.

“In the 1980s, two Indonesian militants fled to Malaysia on the pretext of escaping the regime in their home country.

“They were granted Permanent Resident status as they might be in danger if they were deported.

“The duo turned out to be Abu Bakar Basyir and Abdullah Sungkar, who are pioneers of the Jemaah Islamiyah terror group.

“Not only did they survive in Malaysia, they started schools in Negri Sembilan and Johor in 1985 where they recruited many militants from among Malaysians for JI. But the authorities managed to put a stop to it,” he said.

Enforcement of immigrations laws should be tightened to ensure that no FTF to enter – let alone gain a foothold – in Malaysia, said the source.