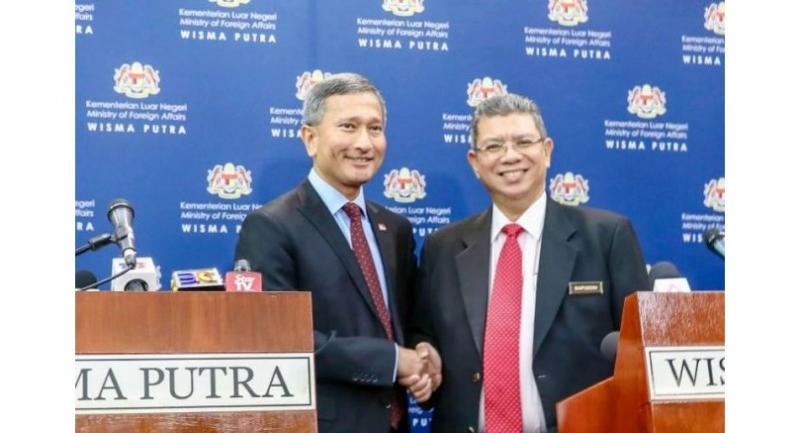 PUTRAJAYA - Singapore and Malaysia agreed on Thursday (March 14) to jointly suspended overlapping port claims in the waters off Tuas, saying this was vital to end a stand-off which has seen at least one collision in the waters since the dispute began in December.

A joint statement by Singapore’s Foreign Minister Vivian Balakrishnan and his Malaysian counterpart Saifuddin Abdullah after their meeting on Thursday morning said they agreed to implement the suspension of overlapping port limits with immediate effect.

Singapore and Malaysia will instead apply their port limits in effect prior to Dec 6 and Oct 25 respectively, undoing the overlap, and work to start talks to delimit their maritime boundary in the area.

The measures, both ministers said, “demonstrate the commitment of both countries to work together to preserve a strong and positive bilateral relationship on the basis of equality and mutual respect, and to resolve bilateral issues amicably in accordance with international law”.

Malaysia had on Oct 25 gazetted an extension to Johor Baru port limits beyond territorial claims made in its 1979 map, and anchored government vessels in the area.

Singapore on Dec 6 extended its port limits to the extent of its territorial waters in response.

Thursday’s meeting at the Malaysian Foreign Ministry in Putrajaya followed one by the ministers in Singapore on Jan 8 to de-escalate the situation and find a way forward to resolve the matter.

The suspension of overlapping port limits was one of five recommendations agreed to by both countries at the Thursday meeting.

The other recommendations are:

- Both parties will suspend and not authorise any commercial activities in the area.

- Both sides will not anchor government vessels in the area.

- Singapore and Malaysia vessels will operate in the area “in accordance with international law including the United Nations Convention on the Law of the Sea (Unclos)”.

“The relevant agencies on both sides will work out practical modalities to avoid untoward incidents in the area,” the statement said.

- A joint committee to delimit maritime boundaries will be set up to ensure these steps are implemented within a month. Negotiations for new boundaries to resolve the overlapping claims will commence within a month after that.

The committee will be headed by the Permanent Secretary of Singapore’s Foreign Ministry, Mr Chee Wee Kiong, and the Secretary General of Malaysia’s Foreign Ministry, Datuk Sri Muhammad Shahrul Ikram Yaakob, both of whom also led the bilateral working group that made these recommendations.

“Both Foreign Ministers agreed that these measures were vital to de-escalate the situation on the ground, and pave the way for maritime boundary delimitation of the area,” the statement said.

“In the event that the committee is unable to reach an amicable solution on delimitation, Malaysia and Singapore may mutually agree to resort to an appropriate international third-party dispute settlement procedure on terms to be mutually agreed by the parties,” it added.

The two ministers also stressed that “these measures taken by both countries shall be without prejudice to Malaysia’s and Singapore’s respective maritime boundary claims in the area”.

On Feb 9, a Greek ship collided with a Malaysian government vessel that was anchored in the disputed zone, following which Singapore’s Foreign Ministry repeated its call for the withdrawal of Malaysian assets from the waters as their presence “poses a threat to safety of navigation in the area”.

Both ministers also discussed the 1962 Water Agreement between Singapore and Malaysia.

They noted that both sides have differing views on the right to review the agreement, and that their attorneys-general will continue discussion on the matter with a view to finding an amicable way forward.