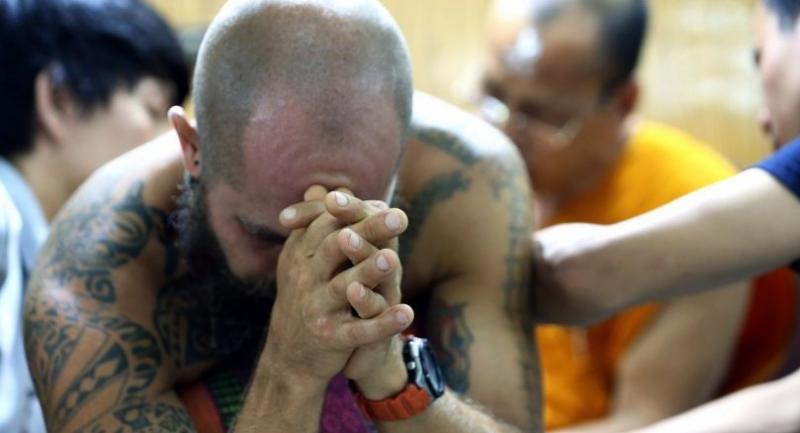 A Russian devotee gets a tattoo made with a steel rod with a sharp point by a Thai Buddhist monk as he participate in the annual Magic Tattoo Festival at Wat Bangphra Buddhist temple in Nakhon Pathom province, Thailand, 16 March.//EPA-EFE

Nakhon Nayok - With inky designs covering his chest and arms, one man crawls on the ground like a tiger while another twists his fingers to resemble claws and growls.

The possessed devotees appear to be on the verge of attack but are quickly restrained and coaxed back to normal.

It's all part of a sacred tattoo festival at the Wat Bang Phra temple in Nakhon Pathom province 80 kilometres (50 miles) west of Bangkok.

Thailand is a deeply superstitious country where animism, folk beliefs and Hinduism seep into the majority faith Buddhism.

Every year, thousands of devotees gather at Wat Bang Phra for the annual festival, which celebrates the traditional Sak Yant tattoos.

Wearers believe the intricate ink brings them good luck and protection from harm.

They flock to the festival so monks can bless and "recharge" their tattoos, while some receive new ones via long metal needles with countless small jabs.

"Whatever sins we committed this past year, we can wash it away when we pay respects to the elder monks who bless our tattoos," said Chalachai Pichuea 44, a motorcycle taxi driver from Bangkok.

Family business owner Wichai Kripjumwan said he comes every year for the renewal process and to thank the monks "who give us these powers".

The symbols favoured by devotees vary from astrological signs, wild animals or inscriptions in Pali and Sanskrit.

Participants work themselves into possessed trances to resemble wild animals and charge towards a stage with a Buddha statue.

Throngs of volunteers block them, then pinch their ears in an act meant to release the spirit.