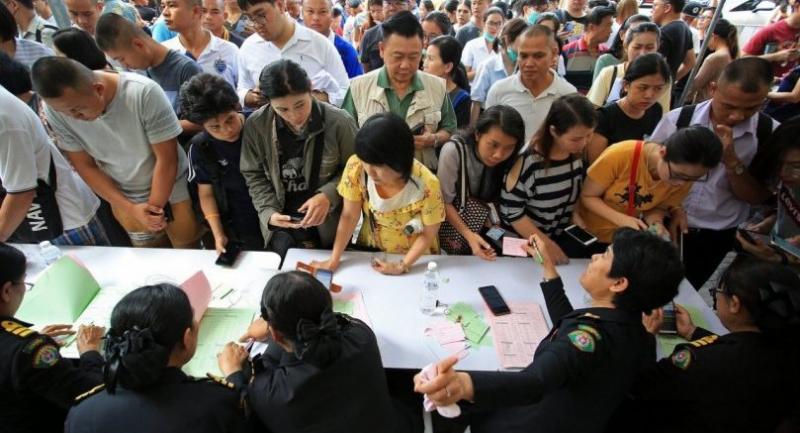 AT LEAST 75% OF THOSE REGISTERED CAST THEIR BALLOTS ACROSS THE COUNTRY, DEFYING THE HEAT AND THE LONG QUEUES

A HUGE NUMBER of voters yesterday turned out to exercise their rights at advance voting polling stations across the country.

Long queues of people defied the afternoon heat to vote in the country’s first election in eight years.

The Election Commission (EC) yesterday estimated at least 75 per cent of the voters who had registered for advance voting turned up to cast their ballots.

EC deputy secretary-general Nat Laosisawakul said the agency was satisfied with the overall conduct of voting yesterday, although it admitted there had been errors in ballots in some areas. The EC also assured that the ballot boxes would be safe under the protection of police.

The ballots cast yesterday would be kept at the Thailand Post Office in Bangkok’s Laksi district, not far from the EC office, he said. After being sorted, the ballots would be sent to their home constituencies and locked up in cells at local police stations, waiting to be counted along with other ballots after the final leg of voting on March 24, Nat explained.

The logistics involved a lot of people, Nat warned, adding that those with any intention of tampering with the ballots to think twice or they could end up in jail. Observers believed the enthusiasm of the masses was because the country had not held an election for nearly a decade and also because only 395 central polling stations were available yesterday across the country for the 2.6 million early bird voters. Over 93,000 stations would be in service for the actual election next week, when 51 million voters will be eligible to cast their votes.

Thailand’s last successful election took place in July 2010, won by the Pheu Thai Party which went on to form a coalition government.

An election was called by the Pheu Thai-led government on February 2, 2014 after the dissolution of Parliament but it was disrupted due to political turmoil and impeded by anti-government protesters. After much confusion, the Constitutional Court then ruled that the voting was legally invalid.

The polling stations in these provinces were packed with voters all day and all those who arrived before the 5pm closing time were allowed to cast their ballots.

Besides the long queues, the crowds, and the heat, a number of early-bird voters also complained of serious issues such as getting the wrong ballot. EC president Ittiporn Boonpracong admitted yesterday that such mistakes had happened. He said voters should insist on getting the right ballot otherwise their vote would be deemed spoiled next week.

Some voters took to social networking platforms such as Twitter and Facebook to warn others about the errors.

A Twitter user @JaruwanPumz advised in a tweet yesterday that voters must make sure the constituency number in the queue card matches their home constituency.

She said she was given the wrong ballot, and when she raised the |matter the authority at the station told her to “just mark one”. Left with no other option in the polling booth, she had to mark the wrong ballot for the party she supported.

The Twitter user, however, said she later brought it to the attention of the authorities and an EC official ensured the mistake was not repeated in the cases of other voters. Her marked ballot, however, was deemed spoiled, she said.

“I woke up early in the morning for this after having waited for four or five years just to see my first [ballot] become voided,” she tweeted. “I walked off the polling station, almost crying. But I told them it’s okay at least they get it right for other voters.”

A few other people also reported online about the same mistake, including how the authority had neglected to correct the mistake and told them to just mark the ballot.