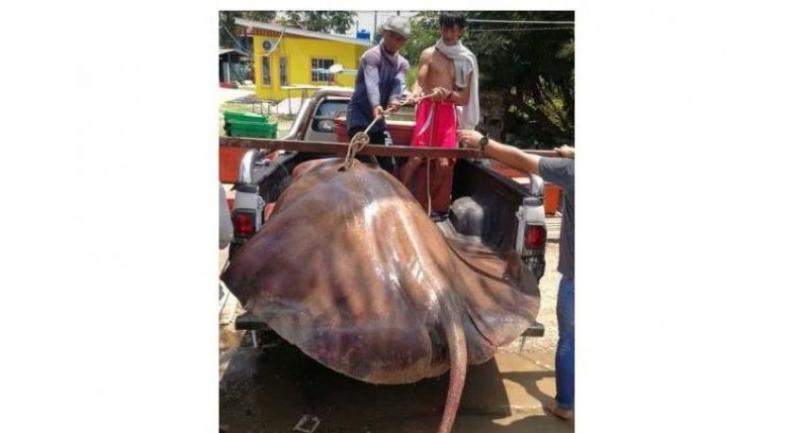 MIRI: Giant stingrays are being blatantly caught offshore northern Sarawak by local fishermen, and nature lovers are questioning whether there is a need to catch and kill these gentle giants of the ocean.

On Friday (March 22) morning, a local fisherman in Sibuti district, 60km south of Miri, publicly boasted about catching a stingray weighing 150kg in the South China Sea off the coast here.

He posted pictures of himself hauling up a huge stingray, measuring the height of an adult man.

Last week, another Sibuti fisherman boasted about his success in netting a 250kg stingray, also in the South China Sea off the coast here.

The stingray was so big that it could not fit into the back of a pick-up truck. These fishermen posted pictures of themselves, even on social media.

Nature lovers are questioning the need to kill these harmless animals. "Are there no more fish around to eat that these fishermen have to catch these gentle giants of the ocean?

"Why are the Sarawak authorities not putting a stop to these needless slaughter?" asked expatriate housewife Jessica Maria on Friday.

There are also those who have posted comments to the Malaysian Nature Society Miri social media sites, criticising the killing of these creatures.

"These giant stingrays are harmless creatures. "They are not even fit for food for humans, as their flesh is tough and rough.

"Why catch and kill these precious creatures?" asked Ian K.

The Star has checked with Sarawak Forestry Corporation (SFC) communications executive Susan Yek on whether stingrays are a protected species, and she said they are not on the list of protected creatures.

It was already dead when the fishermen hauled it onto the jetty along the Miri River. The fishermen told SFC that the whaleshark was caught by accident, as it had gotten entangled in their fishing nets.