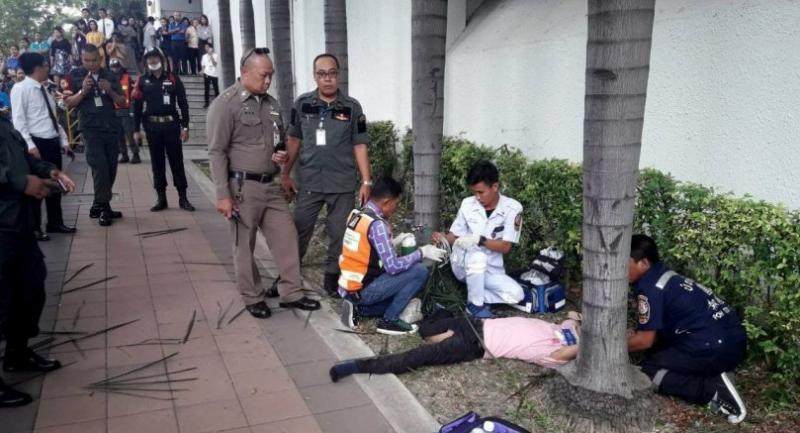 A father was severely injured when he jumped from the eighth floor of the Criminal Court building after his son was sentenced to life imprisonment for murdering a security officer.

Akkaradej Kruanak, the father of Pattarapong Kruanak, was taken to Rajavithi Hospital. He was in critical condition with internal injuries and broken arms and legs.

The suicide attempt happened at 10am after the court sentenced Pattarapong to life imprisonment for killing Sanchai Wanngarm, 30, a security officer at Rajavithi Hospital in 2017.

Police said they have yet to interrogate witnesses who saw how Akkaradej jumped.

The court also fined Pattarapong Bt1,000 for carrying a knife in a public place.

Pattaraponng jumped from the same spot where a father committed suicide on July 23 last year after seeing the suspect in his son’s murder case acquitted.

Supachai Kanlahasunthorn came to the court at 9am to hear the verdict in the trial of a man accused of stabbing hisq son to death in April 2016. Supachai broke down in tears after the judge read the verdict acquitting the defendant at 10am. Leaving the court, he climbed through a hall window onto a terrace, over a wall and jumped to his death in the car park for court staff.