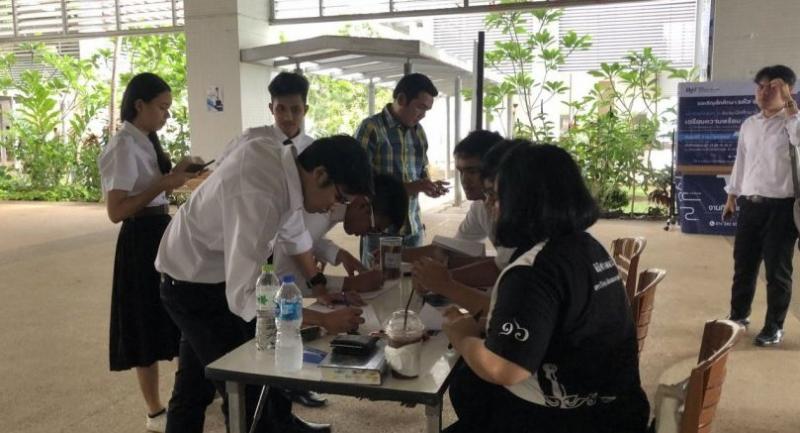 Students of Prince of Songkhla University join in a campaign to dissolve Election Commission on Monday.

With many people having signed up to a petition to dissolve the Election Commission (EC) for its alleged inefficiency in holding the March 24 general election, members of a civil-society group on Monday offered moral support to the embattled agency.

The so-called Nueng Sit, Nueng Sieng (One man, one vote) group is led by Somsak Ponchan and people representing voters in Bangkok and Yasothorn.

Somsak, who presented a bouquet of flowers to an EC representative as a gesture of support for the commission, said that he and the group wanted to give their backing to EC officials nationwide.

“We are not here to widen conflicts, but just want to provide moral support to the EC. We wish that they [continue their] work for the benefit of the country,” he stressed.

“The EC is now under much pressure from the public and the political parties. We want all parties [players] involved in the conflict to give the EC more time. Mistakes can happen,” he added.

Somsak also said that he believed that any inefficiency of the part of the EC, and the fact that it was currently operating slowly following the general election, was because its work involved so much detail and it therefore had to be extremely prudent.

Meanwhile, students of Prince of Songkhla University’s Law Faculty on Monday campaigned to solicit signatures from students, lecturers and the public for a petition to dissolve the electoral agency.

Their campaign appeared to receive good participation, with many people lining up to sign the petition.