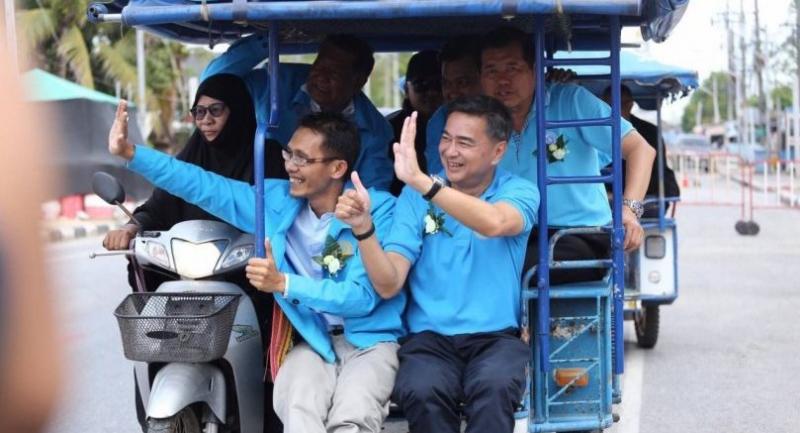 Party faces uphill task for revival as it failed to adapt to changing times: Analysts

It was 5pm on a Sunday evening last month when ballot boxes were closed and poll officials started tallying votes nationwide in Thailand’s first election in years.

“In some parts of my constituency, Future Forward candidates led the tally, followed by Phalang Pracharat, leaving us – the Democrats – behind in third position,” Parit said in an interview.

Losing his first election may have been a nightmare for Parit, leader of the “New Dem”, but for the Democrat Party it was a catastrophe.

The country’s oldest party won some 11.4 million popular votes in the 2011 election, but managed to secure only third position with 3.9 million votes, tipped to win just 55 seats.

The Democrats, who marked their 73rd anniversary last week, failed to secure a single seat in Bangkok – their traditional stronghold – losing to Phalang Pracharat and Future Forward.

In the South, another normally dependable Democrat bastion, Phalang Pracharat and Bhumjaithai swept up votes in several constituencies. The results of the first election in eight years proves that Thailand remains a divided nation, with a clear split between the pro- and anti-Thaksin camps, analysts say.

One camp, which calls itself democratic, is led by the Shinawatra-backed Pheu Thai, while the other is led by the pro-junta Phalang Pracharat Party. Both sides have been battling it out for political control, and this division is one of the reasons behind the Democrats’ huge loss, according to Stithorn Thananithi-chot, a political scientist at King Prajad-hipok’s Institute.

Both Phalang Pracharat, which nominated Prayut Chan-o-cha as its only PM candidate, and the Democrats are seen as allies in the anti-Thaksin camp and both share the same supporters, he pointed out.

However, since in this election, voters could only cast a single ballot, they had to choose just one party.

Obviously, supporters of the anti-Thaksin camp decided to opt for Phalang Pracharat – even though they back Democrats – because they want Prayut to return as prime minister, he said.

“We call this a tactical vote – voters cast their ballot using their head instead of their heart,” the academic explained.

He said the Democrats failed to realise that the demographic and behaviour of voters has changed since Thaksin Shinawatra’s now-defunct Thai Rak Thai won by a landslide in 2005.

While its rival, Thai Rak Thai, which later became Pheu Thai, uses policies to attract voters, the Democrats continue with negative campaigns, with mudslinging and accusations of vote buying, he said.

“Campaigns like this no longer work in the modern era. Voters now understand the electoral system better and focus more on policies that parties have on offer. Money cannot influence them any longer,” Titipol said.

He added that by refusing to accept the reality of the Thai political landscape, the Democrat Party has ended up alienating its supporters.

The rise of Future Forward, which won more than 80 seats in its electoral debut, is a model that this old party should copy. It’s time the Democrats began transforming from a party that is controlled by the older generation to one that allows the new generation a larger role, the academics suggested.

Last year, the party introduced “New Dem”, a group of 21 young party members led by Parit – former party leader Abhisit Vejjajiva’s nephew – with the hope of acting as a bridge to engage with the 8 million first-time voters. However, this group failed to meet the aim. The Democrat Party has been facing a crisis in its party structure for a decade now, said Yuthaporn Issarachai, a political scientist at Sukhothai Thammathirat Open University.

The party still follows the old political system and focuses on seniority, so the New Dem cannot take part in making any decisions or introducing changes, Yuthaporn said.

“Hence, they were unable to win new supporters or secure their old supporters,” he said.

The academics agree that the key for the Democrat Party to survive will be to infuse it with new blood, and allow the new generation to come up with a strategy for the future.

The party really needs to build a connection with young voters, as they are growing up and will become a part of future politics, Titipol said.

“This loss does not mean the end of the party. The Democrats can win big in the next election if they can capture young voters,” Titipol said.

But many challenges lie ahead.

Titipol also wondered how the oldest party would be able to end the long-held perception that it has always made compromises with the military at a time when the new generation is concerned about the future of democracy in Thailand.

Yuthaporn agreed, saying the party needs a “facelift” or a move to “re-democrat” itself.

“Getting the new generation more involved will open a new chapter for the party. But will the old, conservative generation make way for the new?” he asked.

Stithorn also agreed that the Democrats needed to create a balance between the two generations.

So, he said, as a short-term solution, former party leader and premier Chuan Leekpai should come to the party’s rescue by taking up the leadership. Later, the party can take time to find its position, reposition itself and finally re-brand itself, he said.

The academics agree that the Democrat Party can restore its popularity, though it may be a tough task and might take longer than five years.

“It will be tough and take longer because they are not fighting against the opposition, but actually a junta-backed party in the same [anti-Thaksin] segment, especially if Phalang Pracharat leads the next government,” Stithorn said.