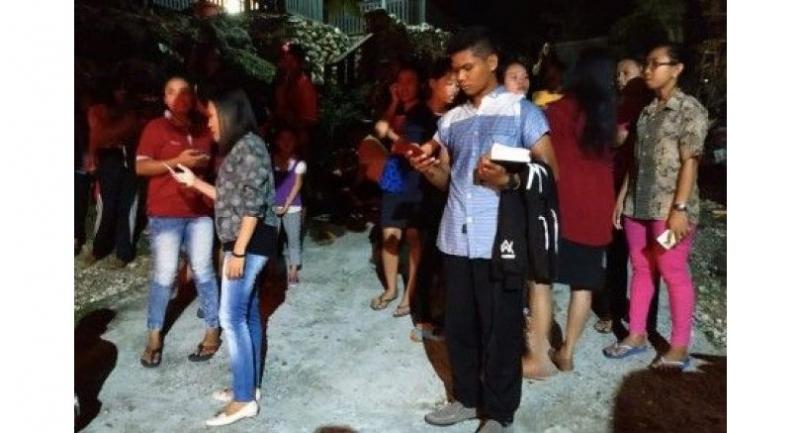 Residents wait outside their houses after a 6.9-magnitude earthquake hit Banggai Raya in Central Sulawesi on April 12. (Antara/Steven Pontoh)

The situation in Banggai Raya in Central Sulawesi has returned to normal following a 6.9-magnitude earthquake that hit the province on Friday evening, as people have started to return to their homes after seeking higher ground in anticipation of a tsunami.

People moved to higher ground and spent the night in the hills after the quake hit Central Sulawesi at 6:40 p.m.

“We returned to our houses in the morning. We ran to a hill last night and then moved to another hill after we encountered snakes,” local Emiliana Rumayer, 30, said on Saturday.

She and her family returned to their house upon learning that the authorities had lifted the tsunami warning.

Meanwhile, residents of Kintom district moved to plantations in Solan and Solan Baru as well as the mosques and district office.

“There was very minor damage. There were no fatalities,” Mochammad said.

Public activities in Banggai Raya, including in Banggai, Banggai Island and Banggai Laut regencies, returned to normal on Saturday morning. Residents swarmed local markets and stores in the areas.

The Meteorology, Climatology and Geophysics Agency said there were more than 40 aftershocks of between 3- and 5-magnitude.