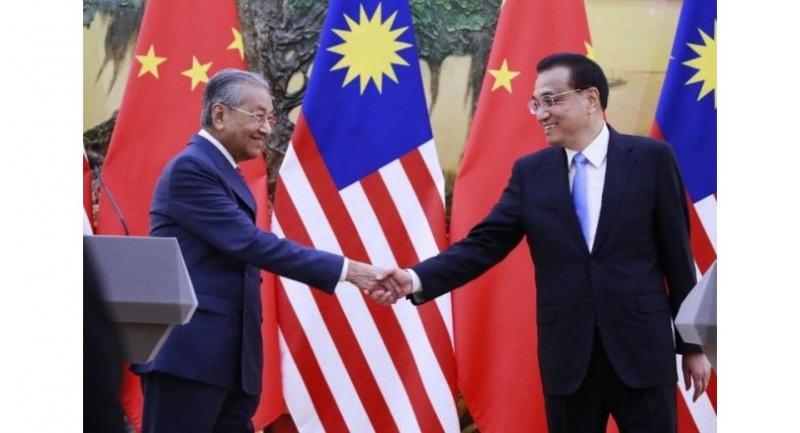 File photo : Malaysia's Prime Minister Mahathir Mohamad (L) shakes hands with China's Premier Li Keqiang at the end of their joint press conference at the Great Hall of the People in Beijing on August 20, 2018.//AFP

Malaysia would have faced a $5-billion penalty if a China-backed rail project was axed entirely, the prime minister said Monday, after a deal was reached to revive the controversial scheme.

Last week Malaysia and China agreed to push ahead with the railway at a 30-percent lower cost, lifting a suspension slapped on the project when a corruption-plagued regime lost power last year.

It was among several Beijing-financed deals in the Southeast Asian country put on hold after the change of government, amid concerns they lacked transparency and were aimed at funnelling cash to the administration of ex-leader Najib Razak.

The 640-kilometer (400-mile) east coast rail link will run from northern Malaysia, near the Thai border, to a port outside Kuala Lumpur, and is seen as a key project in China's Belt and Road infrastructure drive.

Announcing further details Monday, Prime Minister Mahathir Mohamad said that the government "was faced with the choice to either renegotiate or pay termination costs of about 21.78 billion ringgit ($5.3 billion), with nothing to show for it.

"As such, we chose to go back to the negotiating table and call for a more equitable deal, whereby the needs of the Malaysian people would be prioritised."

He also announced the main Chinese company in the scheme, China Communications Construction Company, had agreed to help with operation and maintenance of the line, which would ease the financial burden on Malaysia.

Under the new agreement announced last week, the project cost has been reduced to 44 billion ringgit. Malaysia will still need to take a loan from a Chinese state-owned bank to fund the line but it will be less than under the original deal.

Mahathir, 93, returned for a second stint as premier in May last year after he led a reformist alliance to a surprise victory at the polls, toppling Najib's coalition which had been in power for over six decades.

Najib has since been slapped with dozens of charges over his alleged role in looting state fund 1MDB, and went on trial over the scandal this month.