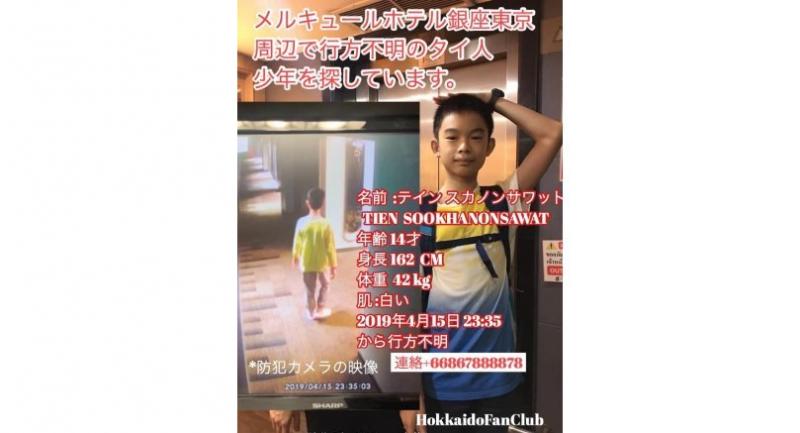 The mother of a Thai teenage boy who went missing in Tokyo on Monday wrote on her Facebook wall that she has found her son but that he had passed away.

Yuwajitra Watchara-arpa did not reveal the cause of the death of Tien Sukanonsawat, 14, on the social network, saying merely that he had passed peacefully from an “unexpected accident”.

The mother thanked everybody for helping to find her son. She however asked for privacy following his death, saying the family would not answer any queries or contacts.

Tien went missing on Monday night, not longer after he and his family arrived in Tokyo for a holiday His parents stayed in one room and their three children, Tien among them, shared another room.

After her mother found out that her son had gone missing, she alerted police and asked to see the hotel’s security video footage.

CCTV footage showed the boy leaving the hotel room on the fifth floor in the middle of the night and walking towards an elevator in his night clothes and hotel slippers.

His mother turned to Facebook to seek help in locating her son. She said the boy had no money, mobile phone or transportation pass cards.

Her post went viral and was shared by many Facebook users including the Thai Embassy in Tokyo and the Thai communities in Japan.