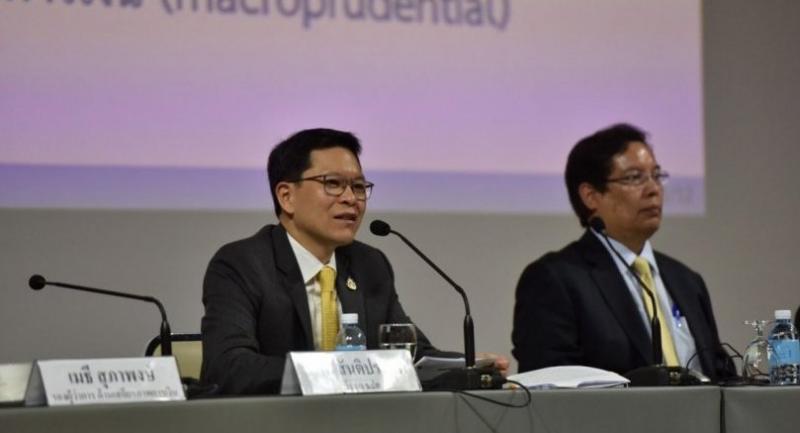 The Bank of Thailand’s governor, Veerathai Santiprabhob, cautioned that the economy could be harmed by further delays in the formation of the new government as well as the rising level of household debt.

The Bank of Thailand (BOT) has adjusted downwards its GDP forecast for 2019 amid rising uncertainties about Thailand’s political situation and the US-China trade war.

The central bank also cautioned that the country’s financial stability is at risk from the alarming increase of household debt nationwide.

“The political uncertainty is a key concern for the growth of the economy. The baseline case for our predictions is that the forming of a new government will not be delayed and that the pace of economic growth will start to pick up in the second half of the year,” said Veerathai Santiprabhob, the BOT’s governor, during this morning's “Analyst Meeting” seminar organised by the BOT.

However, if there are delays in the formation of the new government, new government projects in 2020 may be postponed due to hiccups in the government budget. The budget issue, along with the damages the continuation of political uncertainty will do to business sentiment in the country, may negatively impact the Thai economy, he explained.

“In the past three years, exports have been the key driver of economic growth. However, after mid-2018, export growth has slowed at a fast rate and this will be reflected in the annual economic growth of the Kingdom,” said Titanun Mallikamas, assistant governor of the central bank’s monetary group.

From now on, the growth engine of the country will be powered by tourism and investments, he said.

The BOT predicts that tourists visiting the country will reach 40.4 million in 2019, a slight increase over last year’s 40 million visitors. However, he cautions that due to the weakening global economic condition, the average spending per tourist may decrease.

The central bank further predicts that investment from the public and private sectors will continue to perform well, with public investment forecast to grow by 6.1 per cent in 2019 and private investment by 4.4 per cent.

Factors pushing investments include the Board of Investment (BOI)’s tax incentives to foreign investors looking to invest in the country’s Eastern Economic Corridor (EEC) and the government’s infrastructure projects funded by Public-Private Partnerships, Titanun explained.

However, BOT officials cautioned that the financial stability of the Kingdom has shown worrying signs, particularly through the rise of household debt.

“Household debt has been growing at a worrying rate and presents a risk to the financial stability of the country as well as the entire economy, as it may damage the productivity of the workforce in the long-run,” Veerathai added.