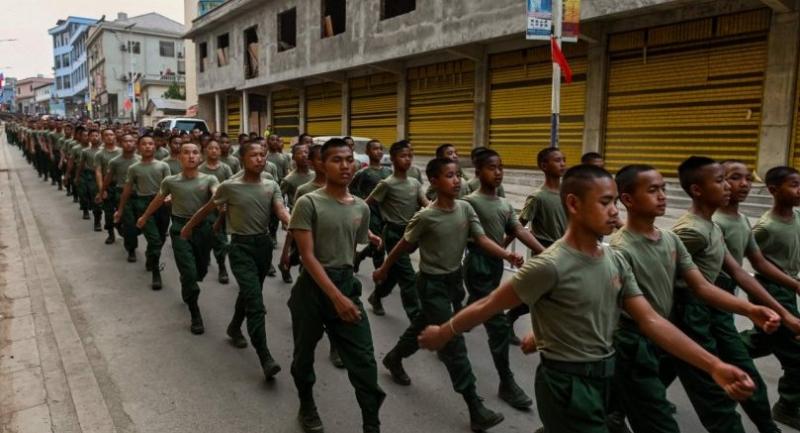 This photo taken on April 17, 2019 shows United Wa State Army (UWSA) soldiers walking during a ceremony in Panghsang to commemorate 30 years of a ceasefire signed with the Myanmar military in the Wa State. (Photo by Ye Aung THU / AFP)

High up in the eastern mountains of Myanmar bordering China, Wa is one of Asia's most remote areas -- and not an easy place to grow up.

Cloistered and highly-militarised, Wa's authoritarian rulers have virtually cut off the region from the rest of Myanmar.

It has a special status within the country -- free from the laws of the central state yet still tethered to the Southeast Asian nation.

But it looks to China, whose money, weapons and political heft has buttressed Wa's unique status.

Checkpoints lock it off from the outside.

Inside, authorities tightly control all aspects of life.

Poverty stalks the mountainous zone -- with many women prodded into massage parlours in the capital of Panghsang or other shady towns on the Chinese border, while men work on low wages in casinos, restaurants and building sites.

The currency is the yuan and the business language is Chinese -- a challenge to many of the other ethnic groups in Panghsang for whom it is not a native tongue.

Then there's conscription, all registered families in Wa must give at least one member to the region's 25,000-strong standing army.

Young boys and girls, some barely teens, sign up. In return they earn around 200 yuan ($30) a month and get free bed and board.

This week they opened their doors for a colourful military parade marking 30 years since they secured a ceasefire with the Myanmar army.

It gave glimpses of life on the fringes, just out of reach of the economic miracle of 'big brother' China and cut off from Myanmar.

As a party atmosphere enveloped the proudly ethnically diverse town, AFP caught up with a few young people -- rare voices from a far away area.

"I'm generally happy in the military. But I do get depressed as well. But today my stress has gone away. I danced and my stress disappeared."

"I grew up here. I love my hometown. My friends and I often visit the nearby mountains. At night we cook and eat Wa curries, we dance at ethnic celebrations like this one.

"I have finished my Chinese language school. I'm currently working at our family restaurant."

"I haven't been to other places yet, but I want to visit a Myanmar state, maybe Bagan (home to Buddhist stupas)."

"I'm studying outside of Wa but I plan to move here. I like this place because my ethnic group are from here. I'm learning Chinese, I might come after I understand it better.

"There is a disciplined society here and the environment is good. I want to do business here.

"I try to learn by going to hospital whenever I have free time. I want to study how doctors take care of their patients."

"I have been here since 2012 working as a cook. Many things have changed... there were not this many houses when I arrived. Roads are better now. I'm happy to be here. Making money is easy here.

"But I don't have many friends now... I barely go out at night. I want to visit around. But I haven't got many friends."

"I'm not going to stay here for good. I came here and I'm staying just for a while to earn money."