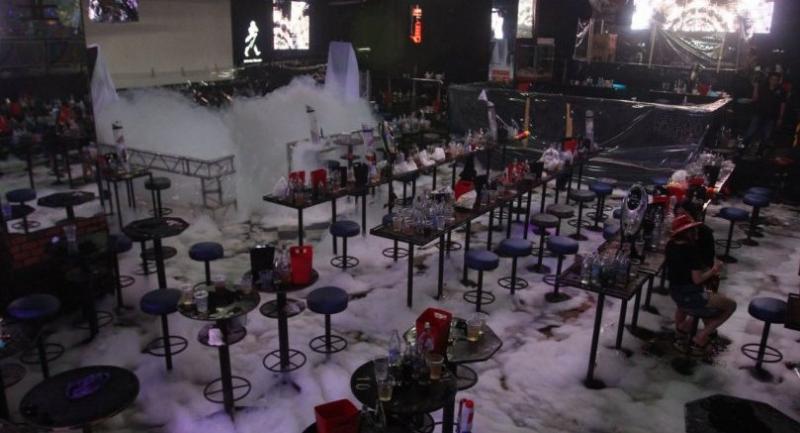 Troops and police raided a pub in Bangkok’s Thon Buri district overnight on Tuesday and found that 38 of its patrons tested positive to drug abuse. The 3am raid against the Wave Pub on Ratchadapisek Road in Talad Plu sub-district was led by Colonel Viroj Nongbualan, a deputy chief of the peacekeeping unit of the Bangkok office of the Internal Security Operations Command. The unit was joined by ISOC officials and anti-narcotics police from the Talad Plu police station.

When the authorities stormed inside, they found 440 pub-goers joined in a foam party for a late Songkran celebration.

Of the 38 patrons arrested for drug use, 25 were women. No underage drinkers were found inside the pub.

The authorities also found some quantities of drugs, including ketamine and crystal meth, on the pub floor.

Viroj said Rewat Chaiyaphum, 43, deputy manager of the pub, was arrested on a charge of violating closing hour and allowing drugs to be abused inside the place.

Viroj said the pub is now facing a five-year closure for violating closing hours and allowing drug use.

The pub was formerly known as the Poseidon Pub and was closed three years ago on similar charges.

The pub is located on the underground floor of the 15-storey Thon Buri Plaza building. Viroj said officials also checked the third and ninth floors of the building and found many electronic gambling machines for card games and horse racing. They seized several computers used to receive online bets.

Viroj said the Talad Plu police station would summon the building owner, Chana Chaksrimongkol, 58, for interrogation before taking legal action against him.