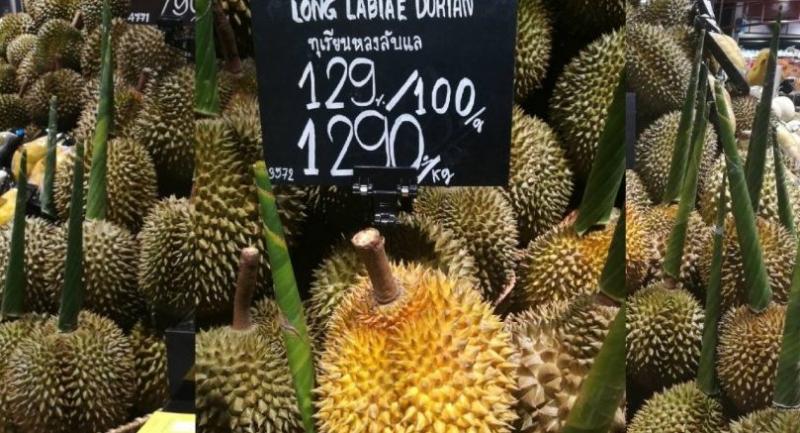 By Boonpim Baiya
The Nation
Uttaradit

The current drought and extreme summer heat could damage half of Uttaradit’s crop of iconic Long and Lin Laplae durians, the provincial governor and farmers fear.

The much-loved varieties fetch over Bt1,000 per kilogram in fruit retail sales or a Bt50,000 reservation fee per tree even before it bears fruit. But this lower northern province has this year already seen many durian, langsat and longkong trees wither. Uttaradit governor Thanakorn Ungchitpaisarn on Wednesday led officials in an urgent visit to Doi Laplae in Tambon Na Nok Kok of Laplae district, where they inspected damages to the fruit orchards caused by a water shortage. They were saddened to find all fruit trees were withering and dying.

The weather in Uttaradit has been over 40 degrees Celsius for almost a week, and orchards have suffered a prolonged period with no rain.

Officials said that if there were no rainfall within this week, the damage to Uttaradit’s s economy-boosting durian, langsat and longkong fruit – which was almost at 40 per cent now – would rise well beyond 50 per cent and perhaps reach 100 per cent.

Only a portion of the first batch of durians from Laplae had made it to market, while the second and third batches would be affected, official said.

Thanakorn said he would ask the Chiang Mai royal rainmaking unit to study the feasibility of artificially producing rain over the area to alleviate the problem.

Farmers in the meantime were forced to carry gallons of water to spray over fruit-bearing trees as their top priority, while having to let those that had not yet borne fruit die, said the governor.

“This is the worst conditions in 40 years,” she said. In a plea for help, the farmer lamented that her income would be affected, while she still needed to pay off her debts to a local co-op and the Bank for Agriculture and Agricultural Cooperatives.