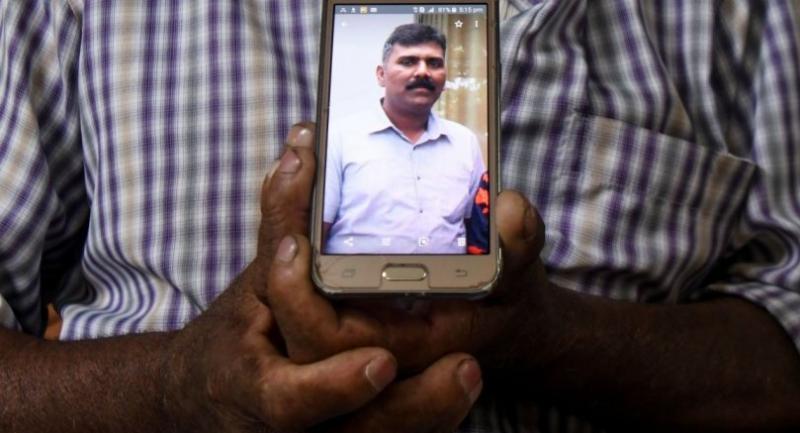 In this photo taken on April 26, 2019, Velusami Raju, father of the Zion Church suicide blast victim Ramesh Raju, shows a photo of his son on a mobile phone at his house, in Kattankudy.//AFP

Batticaloa, Sri Lanka - Ramesh Raju has become a hero to the shell-shocked congregation of the Zion evangelical church in Batticaloa after he died stopping a suicide bomber who was bent on killing hundreds of people.

Nearly a week after the bombing, the road leading to Raju's house in the eastern city is flanked by posters and photographs of the 40-year-old father of two who blocked the attacker at the church door.

A stream of well-wishers queue to express condolences to his widow, a Sunday school teacher.

Raju was one of 29 people, including 14 children, that media reports say died in the blast at Zion, one of three churches and three hotels targeted by Jihadist bombers.

But about 600 people who were inside at the time escaped the human bomb. The dead from the other two churches make up the majority of the 253 overall death toll.

"When he felt suspicious about the bomber he could have run away to safety but I think he chose to scuffle with him in order to stop him from entering the church," his father Velusami Raju told AFP.

"I feel very proud that he saved so many lives, especially so many children," he added.

The east coast city is thought to have become a target as the National Thowheeth Jama'ath (NTJ) blamed for the attacks came from the region.

Zion church was packed at the time and there were dozens of children fresh from Sunday school. Raju had volunteered to help manage the crowds, according to witnesses.

When he spotted an unfamiliar man carrying two huge bags, Raju confronted him and asked him to leave them outside. The bomb went off during the argument.

A number of other children and parents who were outside at the time were killed along with him.

"He was a very good man," said Raju's father, who described his eldest son as the "pillar" of their large family.

"Every memory we shared is so precious... He was the main support for our family, for his three younger sisters and younger brother," the 63-year-old said.

Father and son spoke just minutes before the explosion, Velusami said. Raju promised to call him back once the service was over.

The next time his phone rang, it was a parishioner calling to tell him his son had been killed in a blast.

Raju's younger sister also died in the bombing, along with her husband and 20-month-old son.

"I have lost my grandson but at the same time I feel so proud that my son saved so many children, so other families don't have to go through what we are going through," the retired mill worker said, choking back tears.

Tucked away on a leafy street, the church is now surrounded by heavy security and investigators comb the premises for evidence.

The congregation does not know when a service will be held there again.

The other two churches attacked were Roman Catholic and the church's leaders have suspended all services across the country until Sri Lankan authorities can guarantee security.

Raju was a success story in the Muslim-majority town, setting up his own company at the age of 28 and raising a family with his high school sweetheart.

To his loved ones, the moments leading up to his death serve as yet another reminder of the scale of their loss.

"A lot of army men came to the funeral and saluted his coffin because of his courage. I hope my son's actions inspire others to be brave," Velusami said.

"Now that he's gone, I have no idea how we will go on but I am praying and asking God for help."